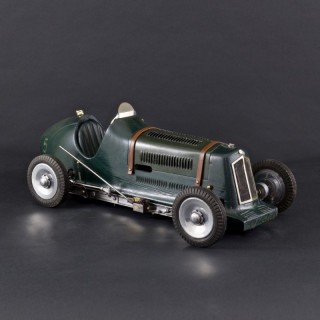 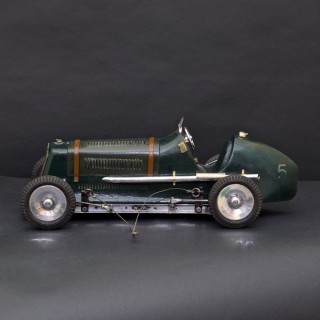 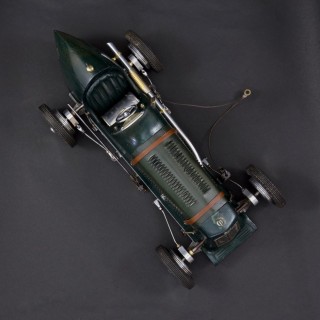 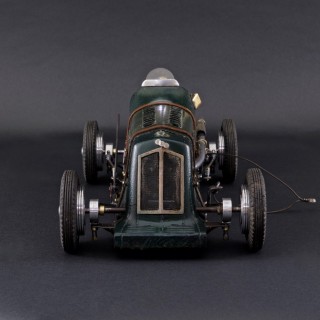 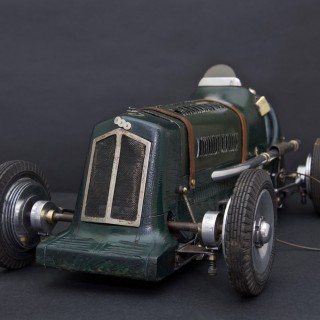 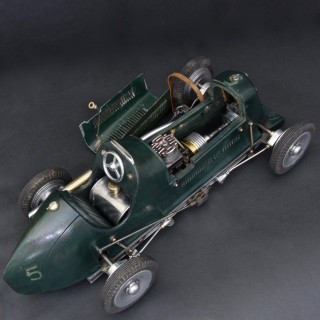 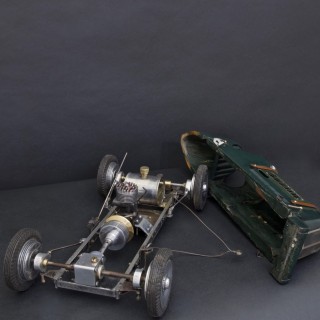 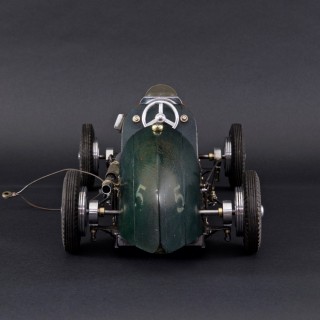 A rare ERA (English Racing Automobiles) ‘Tether Car’ model produced by M&E Models of Exmouth, circa 1948. The company specialised in commercial model manufacturing and in 1947 introduced a range of tethered racing cars with a variety of engine types and mountings.
This model racing car was made with a steel chassis, wooden bodywork, leather straps to fasten the aluminium bonnet, and was originally powered by a miniature spark ignition petrol engine. The engine in this example was updated in the 1950’s to a McCoy 29 ‘Red Head’ Glow engine which would be more reliable and was lightweight compared to the earlier power plant. Marked M&E Models on the chassis and several other components.

Tether Cars are model racing cars powered by miniature internal combustion engines. The cars are attached to a central post by a steel cable in such a manner that they are able to repeatedly run around a circular track. Tether car racing started in California in the late 1930’s. The cars race individually and the winners are determined based on average speed of several laps. Early engines (prior to the 1950s) had spark ignition systems. Later engines use glow plug ignition. A Glow Plug engine, or Glow engine, is a type of small internal combustion engine typically used in model aircraft, model cars and similar applications. Glow engine fuel generally consists of methanol with varying degrees of nitromethane content.

English Racing Automobiles (ERA) was a British racing car manufacturer active from 1933 to 1954. Their ambition was to manufacture and campaign a team of single seater racing cars capable of upholding British prestige in Continental European racing. They were successful from their first season of racing; by the end of 1934 ERAs had scored notable victories against many more established marques and in 1935, at a major race that took place at the challenging Nürburgring circuit, ERAs took first, third, fourth and fifth places. Through the remainder of the decade ERA dominated the ‘voiturette‘ class racing, with the original A-Type design being developed into the B-Type, C-Type and D-Type cars over time.