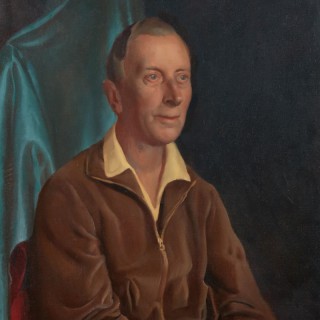 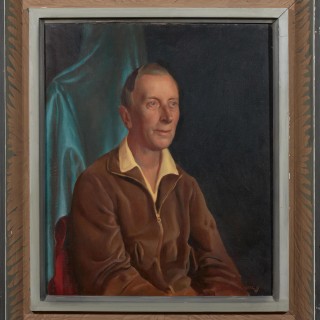 Original Oil on canvas by Modern British artist Victor Hume Moody.
This is something very special, although perhaps more for vintage cinema buffs. The sitter is Ernest Thesiger CBE (1879-1961), not perhaps the most famous actor of his generation but a strong candidate for the most interesting. I’m not going to cut and paste Wikipedia here but I urge you to look him up when you have a moment. Suffice to say he led a full and interesting life on the London stage and in 1930s Hollywood, befriended the great and the good of the day and founded The Disabled Soldiers’ Embroidery Industry. The latter actually proving more use than the name would suggest. He was often in drag for his London roles and Shaw wrote the part of the Dauphin in Saint Joan for him. Moody was less bohemian, a Malvern based artist he presumably became friendly with Thesiger through his association with the Malvern Literary Festival. In 1939 He was commissioned to paint a group of festival luminaries that included Shaw, Priestley and Thesiger and the result was exhibited that year at his solo show with the Goupil Gallery. In the commissioned group Thesiger appears to be wearing the same Zipper top as in our portrait, suggesting it might have been painted at the same time. It is in a wonderfully hand decorated frame by the artist.
Available at Panter and Hall.

Born in London, he studied at Battersea Polytechnic and at Royal College of Art under William Rothenstein. In the early 1930s he moved to Stroud where he was befriended by Charles March Gere who, along with Moody’s former mentor Rothenstein, inducted him into the Cheltenham Group of Artists. Moody painted classical narrative works enthused with an ethos of the Arts and Crafts philosophy. He was appointed Headmaster of Malvern School of Art in 1935, a post he held until 1962 when he was succeeded by his daughter Catherine. The Harris Museum in Preston held a retrospective exhibition, ‘The Last Classicist’, in 1992 and his work featured in the 2010 exhibition ‘Counterpoint – Modern Realism 1910-1950’ held at the Fine Art Society.