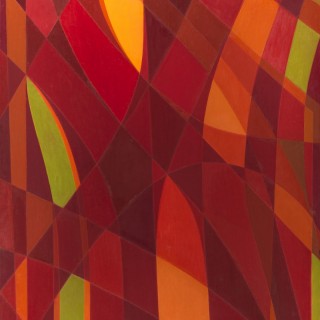 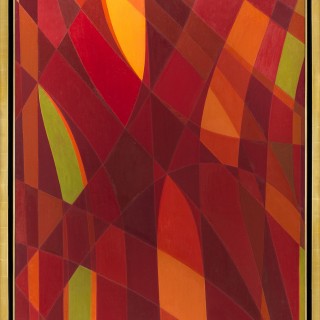 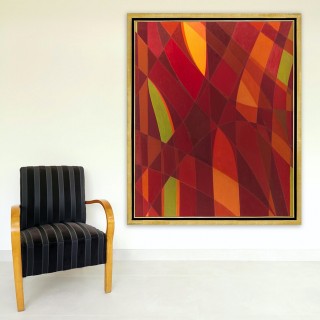 Born in Monte Carlo in 1910, Othello Radou forged his artistic career in a vein of Geometric Abstraction that he made his own. Dynamic, rhythmical, and in a palette at once audacious and restrained, Radou’s paintings moved Le Monde art critic Genevieve Breerette, who hailed them as “supple, harmonious and elegant,” and perceived that Radou knew how to “combine intuition and intelligence, reflection and sensibility.”

The meticulous hard work and discipline that Radou applied in creating his paintings was documented towards the end of his life, illustrating his artistic philosophy and techniques in his An Essay on Painting. The ideas that emerge in Radou’s writings note the importance of music to his creative process. He believed that a painting is built in shapes and colours, the former originated by the artist, the latter comes organically out of the shapes and creates the harmony. “It’s the way the musician accomplishes his themes and melodies – the shapes – which makes the difference, rather than the techniques and harmonies themselves.”

A move to Paris at the age of 17 enabled Othello Radou to study under the tutelage of the artist Jean Lombard, who encouraged him to exhibit with a group of artists known as the Groupe du Vert-Bois. From 1943 onwards Radou regularly exhibited at the Salon d’Automne and the Salon des Indépendants in Paris. He also participated in the inaugural exhibition of the Salon des Réalités Nouvelles in 1946, showing his work with other artists such as Auguste Herbin, Jean-Marie Euzet, and Henri Valensi. The art critic of Le Soir, Leon Degand, wrote of Radou in March 1947: “With regard to painting, we hasten to draw attention to two revelations: Willy Mucha and Othello Radou. The fauvist expressionism of the first and the integral abstraction of the second, testify to serious qualities of invention. Their styles are not improvised and one discovers the complete presence of the artist. Two names that one likes the opportunity to find at private exhibitions.”

Throughout the 1940s and 1950s Othello Radou pursued his journey in search of elegance and perfection and continued to work with commitment and self-analysis, “An artist has to have himself as his own critic; on his own he will get lost. If he is not followed around by his own shadow, by his own discipline, then he will not get far.” This intellectual and artistic quest led to a subtle change in the style of Radou’s paintings from the 1960s onwards, to an increasingly free interpretation, the geometric hand less formal and the abstraction more concentrated. Indeed these later works could be described as “lyrical” Geometric Abstraction, with a more extensive “colourist” palette, evoking the intense hues of the South, the place of his birth.

During the 1960s, 70s, and 80s, Othello Radou exhibited extensively, continuing to exhibit annually at the Salon des Réalités Nouvelles, Groupe du Vert Bois, and the Salon de Mai in Paris. He had a critically acclaimed one-man show at the Galerie Camille Renault in 1971, was commissioned by the French State to execute murals at three different scholastic establishments and at the University of Grenoble, and had canvases purchased both by the Ville de Paris and the French State for the Musée d’Art Moderne. Radou also exhibited internationally in Germany, Canada, and Lebanon.

In the words of the art critic Jean Cassou on the occasion of Othello Radou’s solo show in 1971: “Radou is a demanding artist, who invents geometric forms which are imprisoned in a network of straight lines, spirals, curves and contre-curves, and which give his large paintings, at the same time, a firm structure and very dynamic rhythm and these recent canvases emphasise with more intensity the colours and are more subtle in composition.”

Following the death of his beloved wife Valeria, Radou found it increasingly difficult to maintain his creativity, and ceased to paint altogether in the final few years before his death in 2006 in Paris.