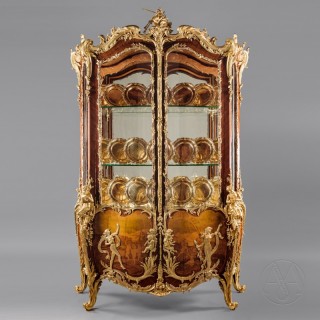 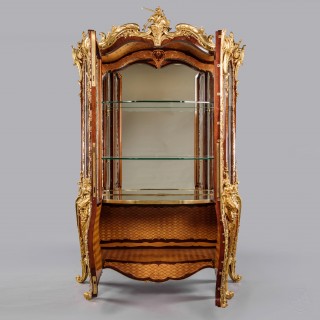 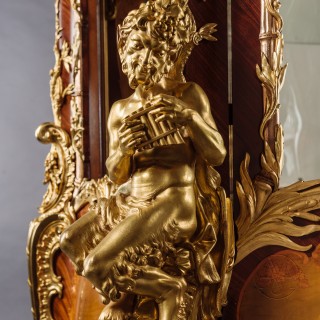 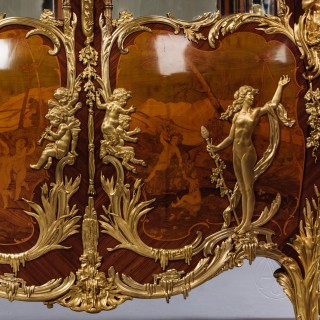 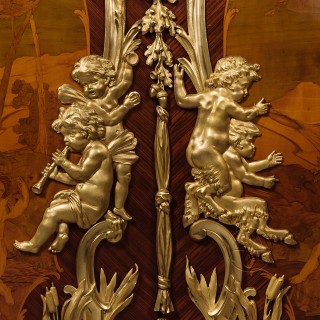 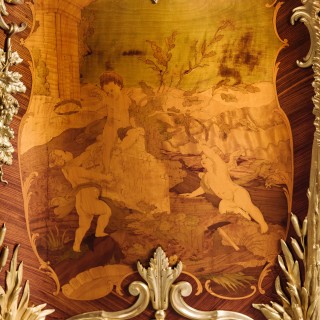 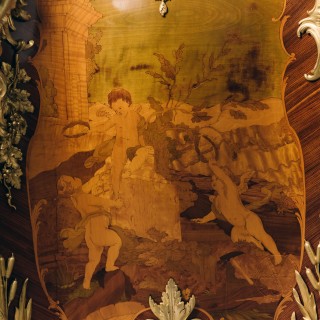 This exceptional vitrine with superb marquetry inlaid panels and expressive gilt-bronze figures, cast in low and high relief, must rank as one of the most important and sumptuous pieces of furniture to have been created during the late 19th century.

Combining the exceptional cabinetmaking skills of Maison Roux et Brunet with the inspirational designs and sculptural brilliance of Léon Messagé, this magnificent vitrine describes through a combination of marquetry and bronze the complex narrative of ‘La Danse des Bacchantes’; with putto revellers, lively bacchante and superbly formed chutes in the form of a faun and faunesse. Intended to be as much a work of art as any precious object that could be placed within, it conveys the exuberant spirit of the Belle Époque and the ambition of its creators.

Standing at 246 cm (97 inches) high, the vitrine has an arched serpentine cornice with gilt-bronze acanthus and foliate cast mounts, centred by a crest of bagpipes above two conforming glazed and panelled doors; the lower panels inlaid with marquetry scenes of dancing putti in their revelry and applied with two finely cast dancing bacchante figures with their arms raised, one holding a thyrsus amongst gilt-bronze vines and bulrushes, watched over by superb gilt-bronze figures of a faun and faunesse of magnificent character, cast in the round; the doors open to a richly inlaid floral marquetry interior with diaper pattern and shell motifs, above a mirrored back panel and lower shelf and further glass shelves, the whole raised on splayed foliate cast tapering legs terminating in scroll feet.

The sophisticated neo-rococo design of the vitrine demonstrates Léon Messagé’s mastery of asymmetry and the rocaille, blending the different media of wood carving, bronze and marquetry into a dynamic unified whole. Each of the bronze mounts is unique, individually sculpted and playfully conceived; from the large sculptural espagnolettes of the faun and faunesse and the Bacchantes, to the smaller elements, such as the charming winged putto musicians opposed by infant fauns, to the centre of the lower section. The allegorical marquetry reserves, to the front and sides of the vitrine, are of superb detail depicting bacchanalian putto dancing in revelry and in playful pursuits. In an unmistakable sign of quality, the interior roof of the vitrine is further inlaid with beautiful marquetry of flowers, tendrils and shells.

While the vitrine displays characteristics of the work of the celebrated ébénistes Joseph Emmanuel Zwiener and Francois Linke, both of whom employed Leon Messagé to design their most important works, the vitrine can be confidently attributed to the celebrated firm of Roux et Brunet, whose work can be seen at Versailles.

The balance of the composition, both in the relationship of the gilt-bronze mounts to the case and the figural marquetry panels, is at once too light and playful for the hand of Zwiener and yet more robust than we might expect from Linke. The combination of musical instruments, the striking figures of the faun and faunesse and the freely sculpted figures of the dancing Bacchante, have no parallel in the work of Zwiener or Linke and are unusual subjects in themselves.

This sculptural iconography however can be found in the work of Roux et Brunet, including a Grand Vitrine included in the auction of their stock by Frederique Lecocq in 1896. Described as: ‘Lot 94 – Grande Vitrine Louis XIV, chutes faune et faunesse’ it shows that these distinctive chutes were not only employed by the firm, but suggests that they were distinct from the more traditional ‘chutes tete de faune’ after the Boulle model, frequently used by other furniture makers.

It is interesting to note that Roux Et Brunet commissioned Francois Linke to make furniture for them when he first arrived in Paris and employed the sculptor Léon Messagé for many of the designs. Linke purchased 13 lots from the auction of Roux Et Brunet’s works in 1896 for 2,374 francs, almost certainly to have the right to use patterns for bronze casting. His purchases included Lot 155 “bureau Louis XV, rocaille a poignée coquille”, which included the famous crab-like acanthus mount designed by Messagé that is now seen almost as a guarantee of his work. This has resulted in some pieces being wrongly attributed to Linke when they are in fact by Brunet.

Most Linke pieces with gilt-bronze mounts are stamped with his reference number on the reverse of the bronze, normally coupled with his name ‘LINKE’ or initials “FL’. Likewise, Zwiener although not exclusively, normally stamped his ‘ZN’ mark to the reverse of his bronze castings. Neither is present on this vitrine further indicating that it is almost certainly by the hand of Roux et Brunet.

Of grand proportions and displaying magnificent self-assurance, the vitrine would almost certainly have been created as a spectacular exhibition piece or as a grand commission. The quality of the design and its superb execution marking the vitrine not only as exceptionally rare, but as a magnificent and important example of the very finest haute luxe furniture produced in Paris during the Belle Époque.

Léon Messagé
Léon Messagé (1842-1901) had a brilliant, but short lived career. He is best known for his incredible sculptural collaboration with François Linke for the 1900 Paris Exposition Universelle. A gifted sculptor, Messagé was also responsible for much of the design and creative work for Roux et Brunet and Joseph-Emmanuel Zwiener.

‘Cahier de dessins & croquis, style Louis XV: bronzes, orfèvrerie, décoration, meubles’ was first published by the sculptor himself, from his Paris address of 40 rue Sedaine. There were five sections with an elaborate title page surmounted by the sculptor’s cipher or talisman of a wing, a pun on his own name as the messenger to the Gods, a motif he used many times on the handles of furniture designed for Linke.

As a sculptor Messagé was trained to produce a wax maquette or model prior to working on a piece. It is especially interesting that his maquettes were of the piece of furniture in its entirety, a rare and exacting task occasionally seen for eighteenth century French Royal commissions. For Messagé it was not just a matter of producing decorative mounts; the piece was conceived as sculpture, bronze, timber and marquetry as one.