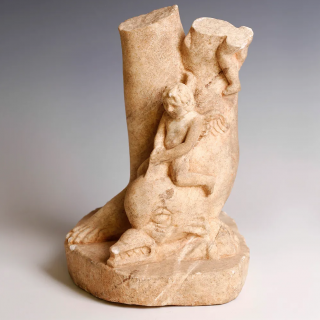 A superb Ancient Roman fragment of a marble statue depicting the Roman goddess Venus, known in Ancient Greek culture as Aphrodite. The fragment comprises the remains of the goddess’ left foot and lower left leg and some scarce remains of her right foot, both resting on an oval base. Her delicate left leg has been rendered in an exquisite naturalistic manner and appears flanked by a small Putto shown riding a dolphin with fragments of a second Putto just above. Both the Putto and the dolphin are classical attributes of Venus. The fragment would have been part of a larger composition, possibly depicting the goddess in her classical stance, nude and emerging from the sea.

Despite being a fragment, the piece displays extremely fine and stable condition. Beautiful colour of the marble. A truly exquisite specimen of Roman sculpture.