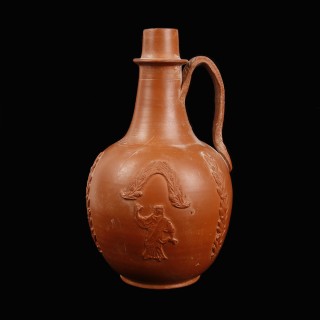 An exceptional Ancient Roman red slipware jug from North Africa. The vessel sits on a short foot and features a wide, pyriform body, tapering neck, decorated with one raised drop-stopping ridge, ending in a flat rim. One applied handle extends from the neck to the vessel’s body, moulded with a foliate decoration. The jug’s body is also enriched with applied decoration. On one side, an upside down foliage ornamental composition of acanthus leaves. On the other, a long-haired man wearing a toga, holding one arm up and with the other holding his garment. On top of his toga, he features a band decorated with scrolls motives, resembling a clavi, which could possibly mean that the figure depicted is a member of high society. Clavi were broad bands extending from hem to hem of the toga across the shoulders, traditionally worn by emperors and senators, however, from the 1st century AD onwards, it became customary for all the members of the aristocracy to wear clavi over their tunic. Arched festoons surmount both decorative motives on either side of the jug and three applied palm fronds complete the decoration.
Date: Circa 1st-3rd Century AD