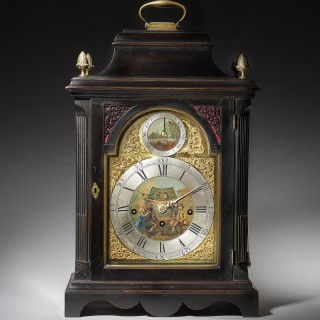 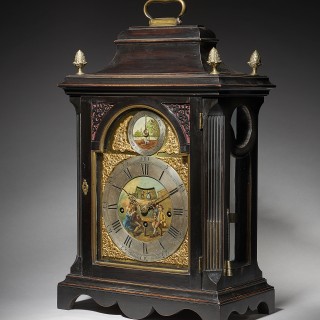 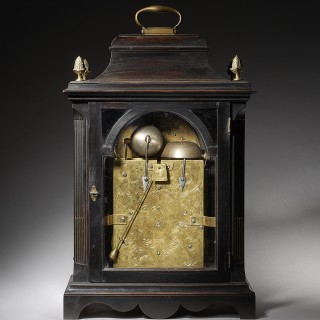 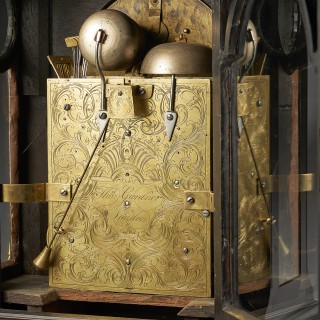 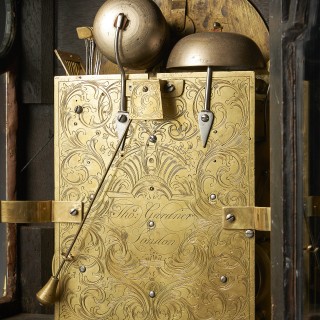 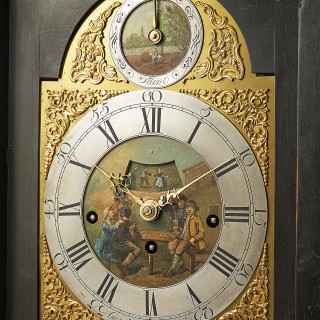 A fantastically rare and intricate bracket clock paying homage to merriment. The dial is elaborately decorated with drinking companies as well as scenes of dancing revellers rotating as the clock runs. The elaborate theme continues inside: a triple gut fusee movement with its original verge escapement and short pendulum. The quarters chime on eight bells with eight hammers, on the hour followed by the hour on an additional bell. The case itself is ebonised and surmounted with four fine pineapple finials. The chamfered corners are fluted and brass reeded with silk-backed pierced ebony sound frets. This impressive clock entertains throughout.

Case
The impressive ebonised case has a bell top and is surmounted by four pineapple finials on the corners and a carrying handle at the top. The case is glazed on all sides so that the complex movement is almost entirely visible. At the front, it has chamfered corners which are fluted and brass reeded, which give the clock a distinguished appearance. There are silk-backed pierced ebony sound frets to the top corners of the front door.

Dial
The extremely unusual painted arched brass dial has a silvered Roman chapter ring with a subsidiary strike silent ring in the arch. The rings are surrounded by fine pierced gilt brass spandrels. The maker has signed the dial at the bottom of the chapter ring, “Gardner London”.

A most unusual feature of the clock is that the centres are painted depicting a drinking company around a table in the middle and, at the top, a landscape with a view on a lake, a rider in the foreground and a church in the background. Even more unusual is the aperture above the middle, behind which is a continually rotating disc depicting four different painted scenes of dancing revellers. The time is indicated by a pair of very fine pierced brass hands on the Roman chapter ring with Arabic five-minute and minute divisions.

Movement
The spring-driven, eight-day, triple gut-fusee movement has a going train with its original verge escapement and short pendulum with knife-edge suspension. The quarters are chimed on a nest of eight bells with eight hammers, on the hour followed by the hour on an additional bell. In addition, the striking can be repeated at will by pulling a cord to the side. The backplate is elaborately engraved around the maker’s signature, “Thos: Gardiner London”

Note on the maker
Thomas Gardner is recorded as being active as a clockmaker in the second and third quarters of the 18th century. Not a lot more is known about him but from the quality of this clock, it can be concluded that he was a very fine maker. He died in 1770.

Wear consistent with age and use. Movement – ‘no major restorations’. the movement has been completely overhauled and keeps fantastic time. Original verge escapement.All three trains original. The case is in lovely original condition including the original ebonizing.