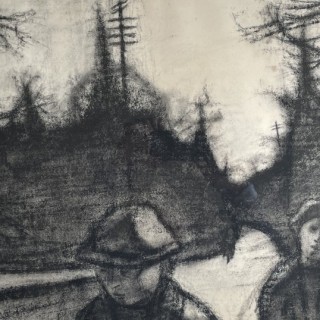 Figures at a Road Junction by Harold Cheesman

Signed, inscribed with title and dated 1960 on a label on the backboard
Charcoal and black conte crayon
Framed

Cheesman was born in Rye, Sussex. After study at Hastings School of Art, 1932-5, he attended the Royal College of Art, finished with a postgraduate year and the award of the J Andrew Lloyd Scholarship for Landscape Painting in 1939. He servedin the Royal Corp of Signals, taking part in the Normandy landings and the campaign through northern Europe. During this time he made a series of sensitive drawings of his fellow soldiers, examples of which are in the collection of the Imperial War Museum.

He exhibited at the Royal Academy, New English Art Club, Royal Watercolour Society and elsewhere, having a series of one-man exhibitions at the Ashgate Gallery Farnham, 1863-80. He was elected a fellow of the RWS in 1974. He taught part time at Farnham School of Art from 1946, and full time from 1948. He held a retrospective exhibition there in 1980. The Imperial War Museum, Towner Art Gallery, Eastbourne, Melbourne City Art Gallery and other galleries hold examples of his work. He married the artist Doreen Cheesman.

Figures at a Road Junction by Harold Cheesman