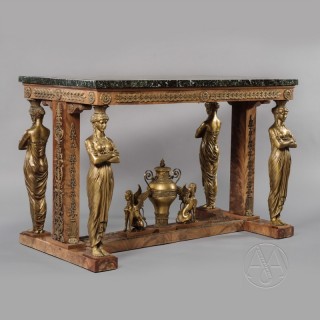 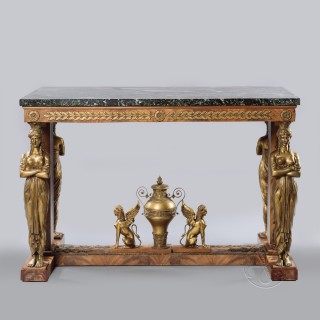 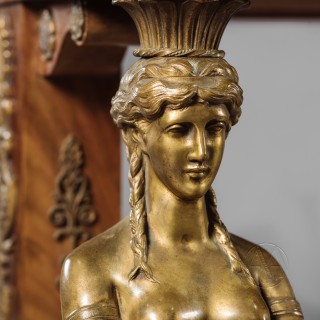 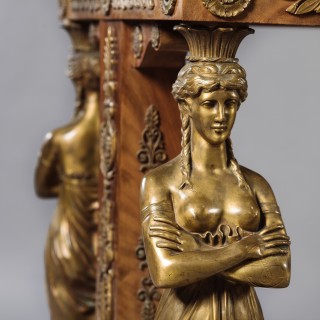 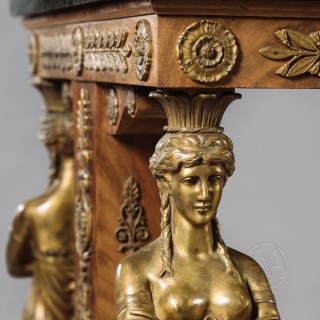 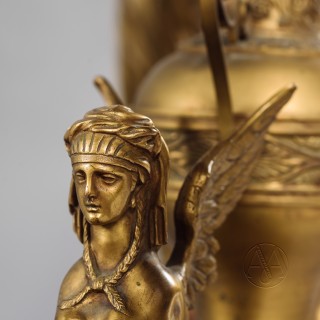 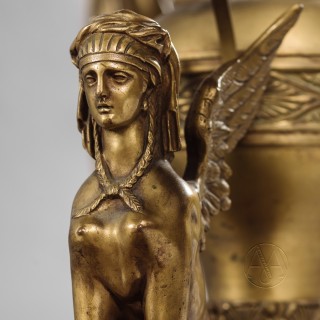 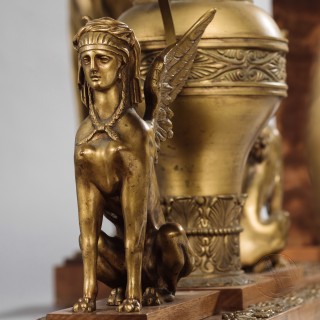 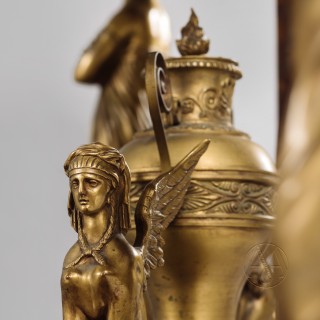 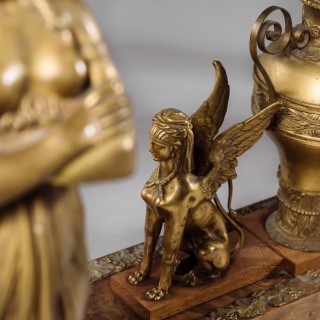 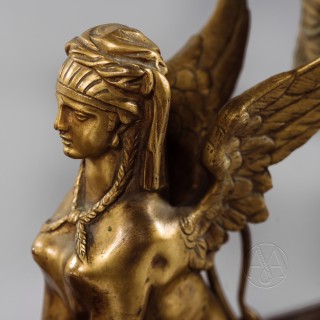 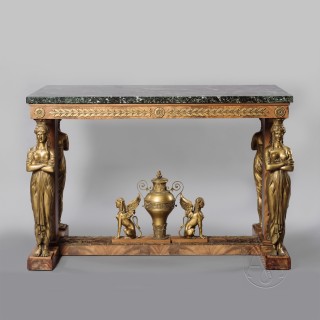 The rectangular marble top above a frieze applied with laurel leaves on gilt-bronze female caryatid supports and rectangular supports applied with anthemion decoration, on an ‘H’-shaped plinth centred by a lidded vase flanked by sphinxes.

The design for this important table is derived from the ‘console double face’ supplied in 1808 by by François-Honoré- Georges Jacob dit Jacob-Desmalter (d. 1841), for the bedroom of Caroline Murat, Napoléon’s youngest sister, at the Palais de l’Elysée, Paris. The original design relies heavily on the work of the important architects and designers Percier et Fontaine. Jacobs table is now displayed in the Grand Trianon, Versailles (see D. Ledoux-Lebard, Le Grand Trianon, Meubles et objets d’art, (Paris), 1975; vol. I, p. 25).

One of the most important and influential families of cabinet-makers who led fashion and standards from 1765 to 1847. Their work encompasses three generations of the family, from George Jacob (the founder, 1739-1814), to his two sons Georges II (1768-1803) and François-Honoré-Georges (1770-1841), and finally his grandson Georges-Alphonse (1799-1870). They ran one of the most successful and influential furniture workshops in Paris

George Jacob (Senior) was one of the most prominent Parisian master menuisiers, producing carved, painted and gilded beds and seat furniture and upholstery work for the French royal châteaux, in the early Neoclassical style that is usually associated with Louis XVI. He retired in 1796, leaving his workshop in the hands of his sons, but when George II died, Jacob returned from retirement to oversee the constant supply of furnishings for Napoleon’s residences.

François-Honoré-Georges Jacob-Desmalter was the principal supplier of furniture to the Emperor and also received commissions from Pauline Borghese, Napoleon’s sister in Rome, and the Empresses Joséphine and Marie Louise, for whom he supplied numerous pieces for the Château de Malmaison, the Château de Compiègne, the Tuileries Palace, and other imperial residences. Important commissions included a magnificent cradle built for the infant King of Rome, and the most expensive single item, the jewel cabinet for the Empress, delivered in 1809 for the Empress Joséphine’s state bedroom in the Tuileries

Georges-Alphonse Jacob Desmalter was to see the business flourish from 1830 to 1847. He exhibited at all the most important exhibitions, selling furniture to the Royal Family and receiving many royal commissions. His style was an up-to-date version of the Empire style typified under Charles X and Louis-Philippe period using indigenous woods and ‘bois clairs’.