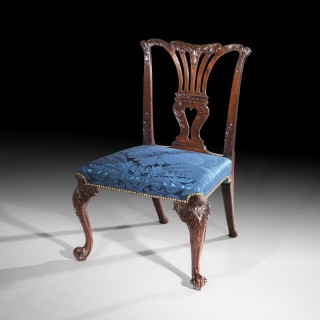 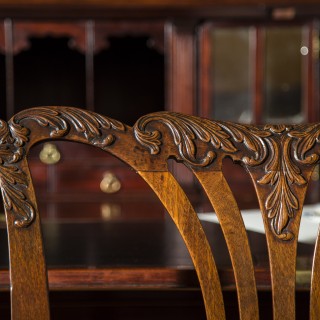 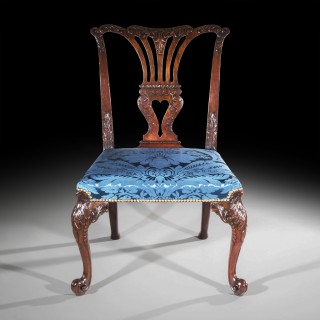 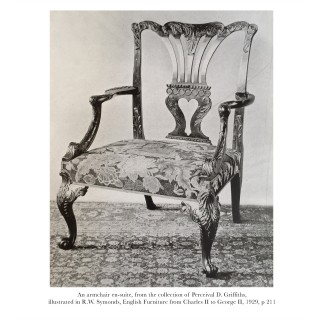 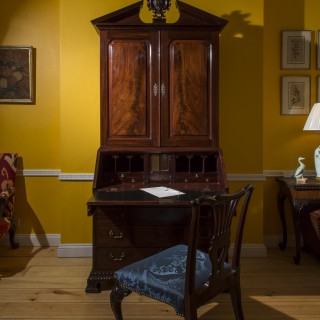 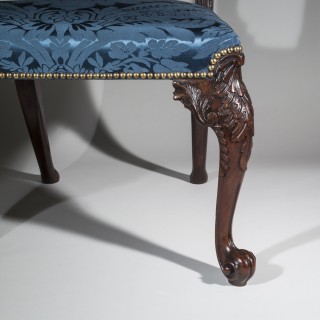 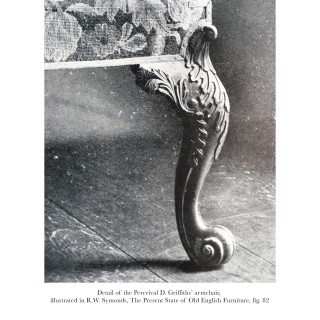 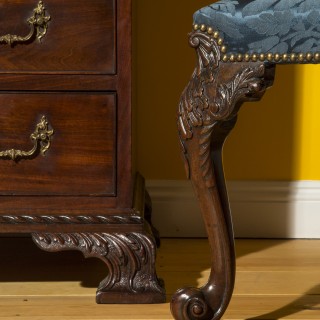 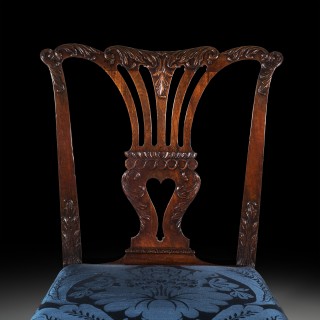 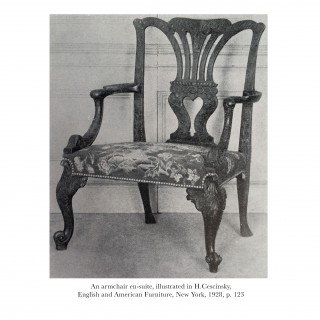 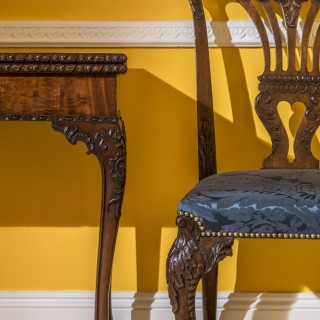 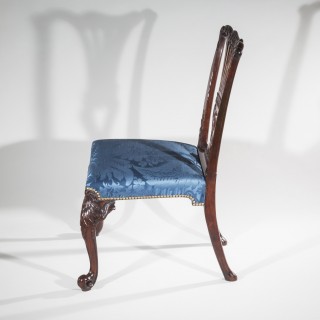 Why we like it
Being one of the best and rarest designs of its time, executed to the highest possible standards, with almost certain provenance and having survived in such a remarkably original condition makes this chair a truly rare and desirable specimen of its kind. A museum-quality piece for those who only wants the best.

This finely carved chair, with its overlapping foliate-carved knees and boldly scrolled toes, almost certainly formed part of a suite supplied to John, 2nd Earl Poulett (d.1764) for Hinton House, Hinton St.George, Somerset. These chairs would have been acquired during the 2nd Earl’s alterations during the middle of the eighteenth century which were probably conducted under the supervision of the architect, Matthew Brettingham. In the tradition set by his father, 4th Baron Poulett (d.1743), who served as First Lord of the Treasury and Lord Steward of the Household to Queen Anne, the 2nd Earl refurbished the family’s seat in a grandeur befitting the family seat and employed the most fashionable London cabinetmakers of the day. While the Poulett papers (Somerset Record Office) are incomplete, several cabinetmakers, including Thomas Chippendale, Matthias Lock, and Giles Grendey, can be associated with Hinton House furniture on the basis of documented designs or similarities to known oeuvres. This particular suite of seat furniture may be attributed to Messrs, William Vile (d.1767) and John Cobb (d.1778), later Royal cabinet-makers to King George III, who formed a powerful Syndicate with William Hallett (d.1781) in St.Martin’s Lane from 1753. Vile and Cobb supplied a set of virtually identical side chairs to Anthony Chute for the Vyne, Hampshire in that same year, one of which is illustrated in Anthony Coleridge’s Chippendale Furniture, London, 1968, fig.27. Both Vile and Hallett were born in Somerset, within five miles of Hinton St. George and maintained contact with their Somerset relations. As such, they would have been privy to the 2nd Earl’s refurbishments.

An open armchair of identical pattern, possibly en-suite with the present example from the collection of Perceival D. Griffiths is illustrated in R.W. Symonds, English Furniture from Charles II to George II, 1929, p 211 and R.W. Symonds, The Present State of Old English Furniture, fig. 82, and M. Harris & Sons, A Catalogue and Index of Old Furniture and Works of Decorative Art, part II, p. 212, no. F21988 (circa 1932). A further related example is illustrated in H.Cescinsky and G.L. Hunter, English and American Furniture, New York, 1928, p. 123.

A pair of Gainsborough armchairs of the same pattern and possibly from the same set were in the collection of Alfred I. duPont (1864 – 1935), now in the Morning Room at Nemours Mansion, Delaware.

Provenance:
Possibly supplied to John, 2nd Earl Poulett (d.1764) for Hinton House, Hinton St. George, Somerset. A set of twelve side chairs and a pair of library armchairs with identical carving to front legs, possibly en-suite to the present chair, was sold by the Countess Poulett, sold Lawrence of Crewkerne, 24 May 1984, lot 149; a pair of armchairs from this suite subsequently sold Christie’s, New York, 16 October 1998, Lot 333 ($107,000).