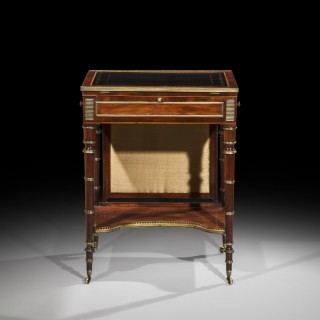 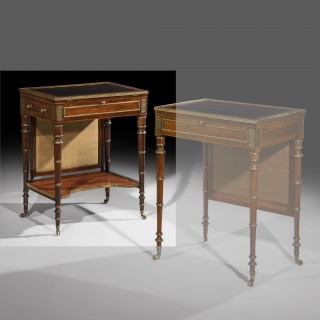 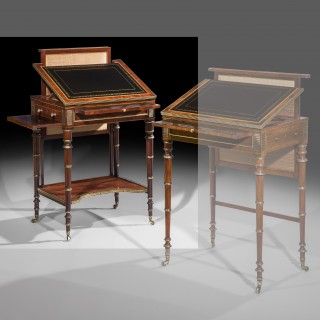 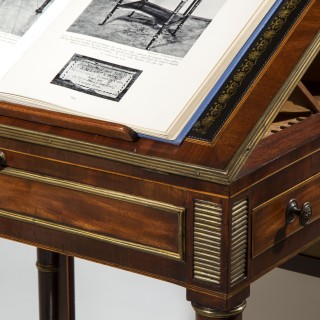 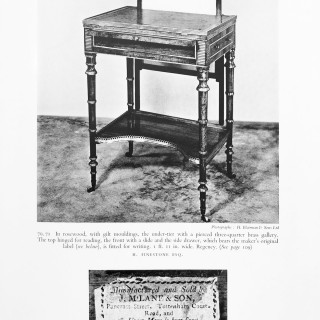 Inlaid overall with boxwood and ebonised lines; with a crossbanded adjustable ratcheted top, with gilt brass bound edge and tooled black leather lined writing surface, over a cedar-lined frieze side drawer and a leather lined writing slide to the front, the corners mounted with recessed reeded brass panels, over the turned, chased ormolu collars mounted tapering legs, terminating in original brass-capped castors. With silk-lined sliding screen at the reverse and a detachable book-rest and an inverted serpentine-fronted, pierced brass galleried lower tier.

Being designed in a more restrained ‘Franglais’ manner after Jean-Henri Riesener’s original, supplied in 1780 for Marie-Antoinette’s cabinet intérieur at Versailles, this elegant table epitomises the finest work of the London cabinet-maker John McLean. McLean’s firm is notable for its regular use of trade labels, several versions of which are recorded, bearing the firm’s name and various addresses. One of such labels reads: ‘Elegant / PARISIAN FURNITURE / WAREROOMS ‘. The mention of ‘Parisian Furniture’ is particularly interesting as the design of the firm’s earlier furniture, of which the present tables are finest examples, displays lightness and delicacy, inspired by French prototypes. An announcement in The Times of January 31, 1806 declared that the firm ‘have re-opened their Warerooms with a new and elegant assemblage of Parisian furniture’, further advertising on February 11, 1811 that they wished to ‘acquaint the Nobility, gentry and Public in general, they have in their Ware rooms a new and elegant assortment of every article of useful and ornamental furniture….’.

The group of labelled furniture displays such a distinctive artistic personality that many similar unlabelled items can be confidently attributed to their workshops. The pieces owe much to French influence, not only in their design but in their lavish use of delicate finely chased gilt bronze mounts. They favoured dark rosewood, often combined with boxwood strings and satinwood crossbanding. Their use of a unique repertoire of gilt mounts, not encountered on other furniture of the period is a valuable aid to attribution.

Having workshops in Upper Marylebone High Street from 1783 to 1825, John Mclean seems to have had a broad operation, supplying patrons such as the Earl of Jersey at Middleton Park, Oxfordshire, and Edward Lascelles for Harewood House. Sheraton praised his work for its finish “in the neatest manner” in the Cabinet-Maker and Upholsterer’s Drawing Book, 1793, where a similar type of leather-lined hinged-top table, was entitled ‘Lady’s Cabinet and Writing Table’.

A closely related table in rosewood, also attributed to John McLean, is available.

A writing and reading screen table identical to the present one, in rosewood, formerly with H. Blairman and Sons Ltd, bearing John McLean’s trade label for 1798-1805, is illustrated in Margaret Jourdain, English Furniture: the Georgian Period, 1953, p. 103, figs 70, 71; and Simon Redburn, ‘John McLean and Son’, Furniture History, 1978, vol. XIV, pl. 31b and 36a; subsequently sold Christie’s London, 14 November 1996, lot 160 (£34,500). McLean’s firm generally favoured dark rosewood, and the present table is possibly a unique example known to have been made in mahogany.