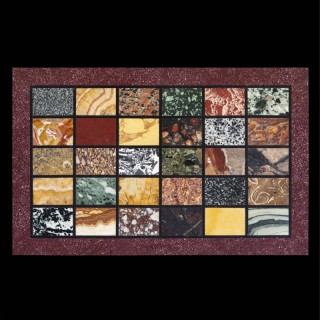 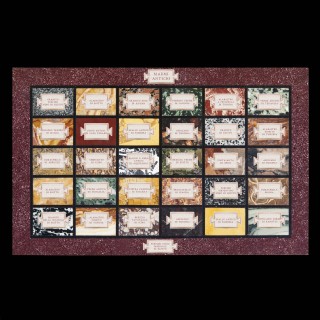 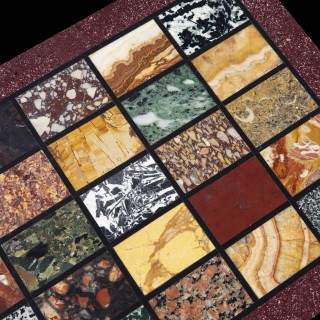 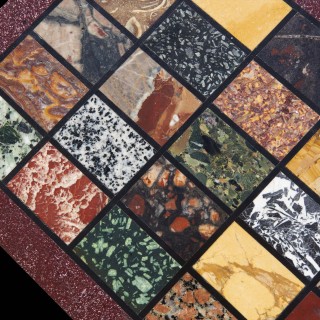 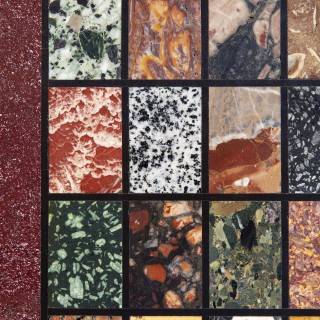 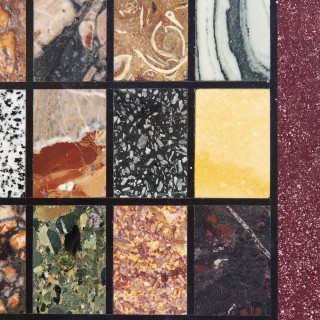 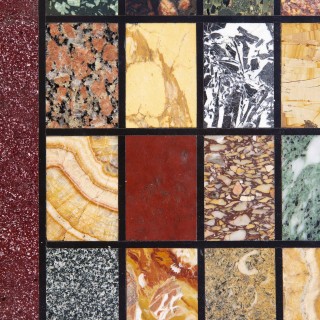 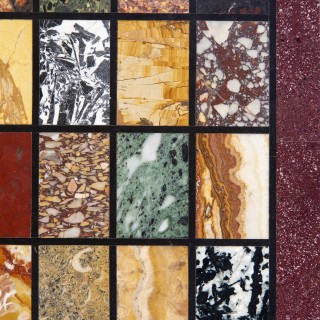 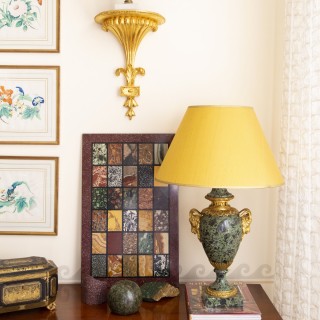 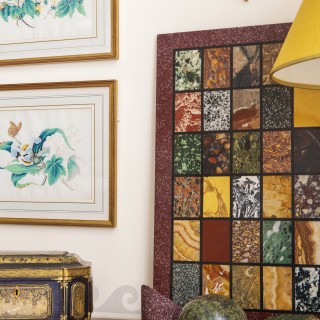 This wonderfully decorative object is not only a feast of colour, but also a carefully considered collection of interesting and rare specimens, evoking classical sophistication of a well-travelled gentleman’s library of the Enlightenment era.

Contents and Symbolism
The panneau is bordered in Egyptian red porphyry, also called Roman Imperial porphyry (porfido rosso romano), quarried in Egypt and highly prized since the Roman times for its rarity and noble ‘Imperial’ purple colour, a symbol of power. Its Greek ‘cousin’, green porphyry, or porfido verde di Laconia is also present in this picture. Together with the red porphyry, it had been used to stunning decorative effect since the Roman times through to the Renaissance, most famously in the Cosmati floors in various cathedrals in Italy.

An interesting sample, identified as Granito della Colonna, is named after a small column in the church of Santa Prassede in Rome, made of the same stone and said to be that which Christ was chained to during his flagellation in Jerusalem. In this same church, there is another column made of Porfido Nero di Egitto, or black Egyptian porphyry – another notable specimen from this collection. Two vases made of this very rare stone are displayed in the Galleria de’ Candelabri of the Vatican Museum, nos. 1463 and 1508.

Another notable example is Bianco e Nero Antico, one of the stones favoured by the Louis XIV for the decoration of the Palace of Versailles. Vitruvius reported that this marble, highly valued by the ancients, had decorated the royal palace of Mausolus. There are four beautiful columns of this rare marble in the church of Santa Cecilia in Trastevere in Rome.

Marmo Porta Santa (Portasanta di Chios) owes its name to the fact that this stone was used for the jambs of the Holy Door (Porta Santa) at St Peter’s Basilica in Rome. The Holy Door remains blocked most years. A ceremony is held on the Christmas Eve before a Jubilee year when the Pope opens the door with a silver hammer and pilgrims are allowed to enter the door. Other beautiful columns of this marble can be seen in the altar of S. Sebastiano in the Vatican Basilica and in the church of Santa Agnese Fuori le Mura.

Semesanto di Sciro is another curious example from Skyros, Greece. Called so because its breccie resemble the ‘holy seed’ (seme santo), a confection prepared by pharmacists in which sugar coated comfits are variously coloured to tempt children.