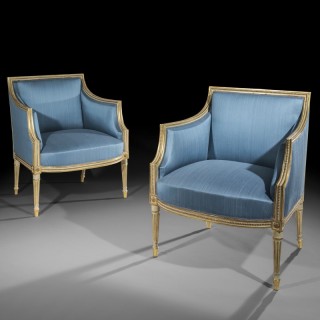 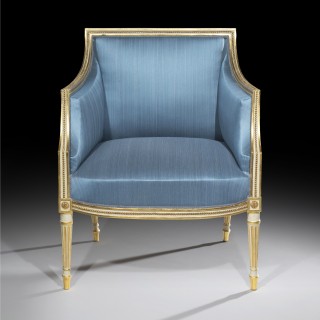 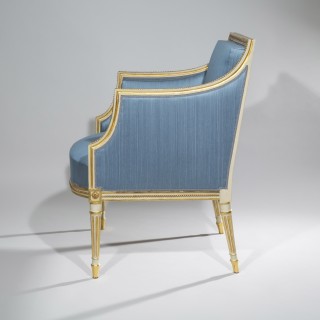 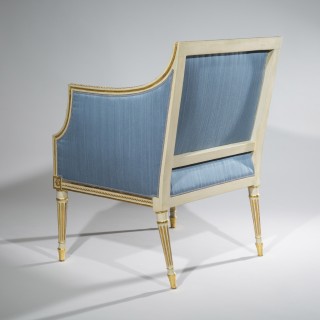 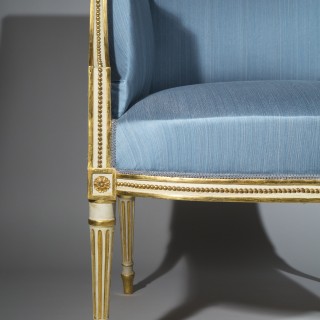 An exceptional pair of George III period cream japanned and parcel-gilt armchairs, having the square backs and sides with bead moulded frames, on turned fluted legs headed by paterae,

These chairs are characteristic of English Francophile taste of the late 18th century, with a minimum of ornamentation typical of James Wyatt. The main proponent of this style was the architect Henry Holland, who has visited France in 1785 and whose designs demonstrate a detailed knowledge of French architecture and furniture design. He is best remembered for his work at Carlton House for the Prince Regent, where he provided interiors suitable for the magnificent French furniture acquired by the future George IV. Holland’s work at Carlton House, and those houses of the Prince’s circle, brought him into contact with French émigré cabinet-makers and craftsmen, whose influence is seen in his own furniture designs. One of them was Francois Hervé, who supplied seat furniture in this taste to “The Honble Lady Spencer … by the order of Messrs. Holland & Daguire” in 1791. Henry Holland’s triple Library at Althorp is perhaps one of his most successful creations – and his works at Althorp, totalling £20,257 certainly found favour with the Countess Spencer, judging that Holland had given them a house ‘the image of comfort, so convenient, so cheerful, so neat, so roomy yet so compact’.

The Roman-tablet and antique-fluted frames, wreathed in ‘Venus’ pearls after the ‘Etruscan’ fashion. Evoking lyric poetry, Apollonian palms flower their corner tablets and wreath the hollowed capitals of their columnar legs. A related pattern, described as ‘in the newest taste’ featured in Thomas Sheraton’s, Cabinet-Maker and Upholsterer’s Drawing Book, 1791-4 (pl. 32 of Part III).

A sofa of nearly identical design and construction, later gilt and lacking the beaded decoration, is in the collection of National Trust at Belton House, Lincolnshire (NT 434792).

A related pair of George III painted and parcel-gilt open armchairs, similarly decorated in the manner indicative of the oeuvre of Francois Hervé, and bearing a Norman Adams trade label, was sold from the collection of the late Mrs. Charles W. Engelhard, 18 March 2005, Christie’s, New York ($45,600).