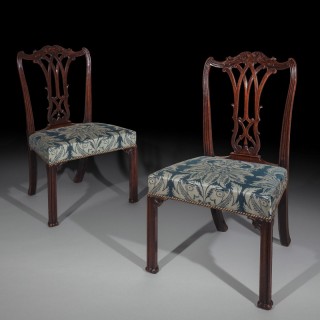 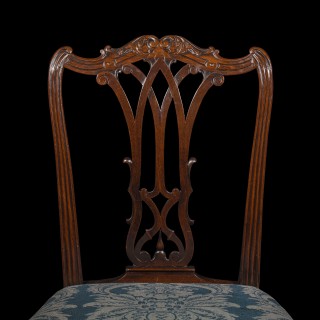 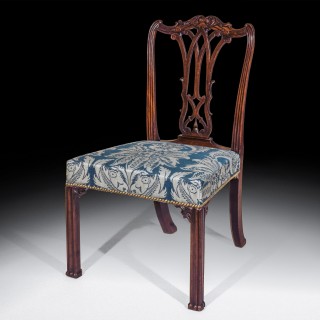 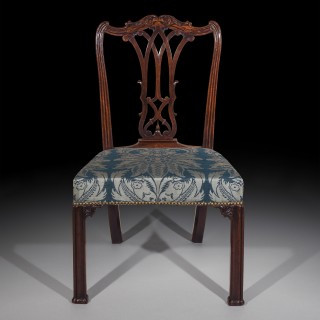 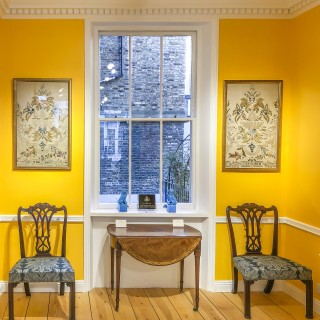 Fine pair George III period mahogany side chairs of outstanding quality, in the style of Thomas Chippendale’s ‘Director’
English, circa 1765.

The stylized cluster-column profile of the front legs and the foliate carving on the spandrels found on the present chairs are some of the characteristic features of the documented work of the leading Yorkshire cabinet-making firm of Wright and Elwick ( 1745-1771).

Richard Wright and Edward Elwick advertised themselves on their trade card as `Upholders from London….selling Cabinet work of ye Newest Fashion, Together with all sorts of Household Furniture’. Subscribers to Chippendale`s The Gentleman and Cabinet-Maker`s Director, 1754, Wright and Elwick would have been familiar with current London taste. They supplied furniture to the leading families of Yorkshire, including the Earl of Strafford at Wentworth, Sir Rowland Winn at Nostell Priory, the Duke of Norfolk at Worksop Manor, Viscount Irwin at Temple Newsam House and the Marquess of Rockingham at Wentworth Woodhouse, see Christie`s London sale, July 8, 1998.

With its gothic arched backs pierced with foliate scrolls, the design of these chairs was certainly inspired by patterns published in Thomas Chippendale’s ‘The Gentleman and Cabinet-maker’s Director. Being a large collection of the most elegant and useful designs of household furniture in the Gothic, Chinese and Modern taste.’ (1754).