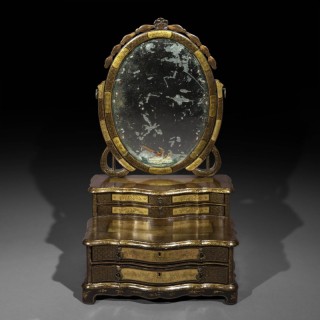 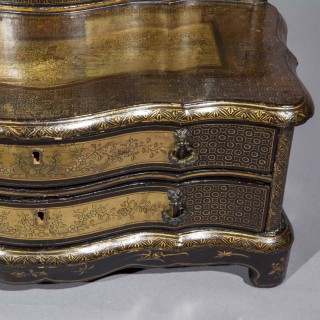 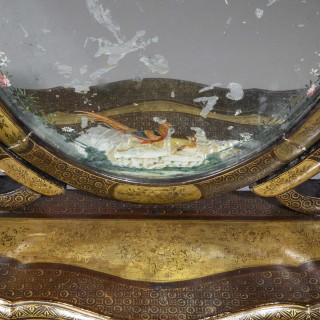 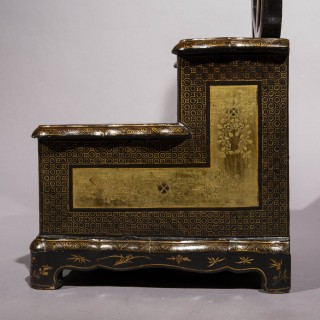 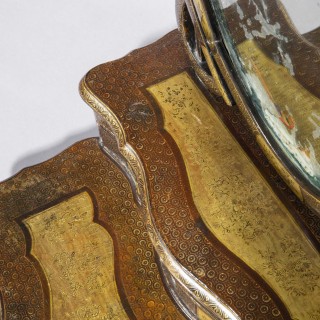 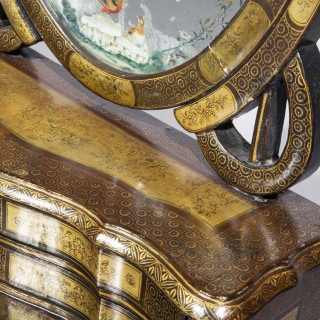 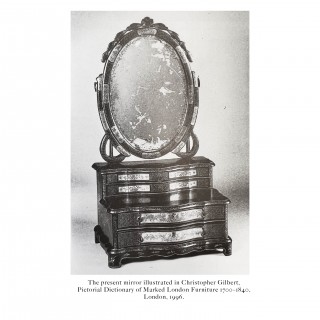 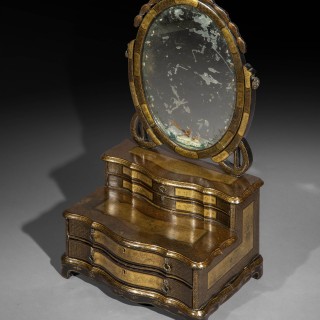 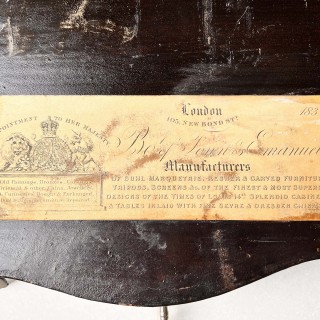 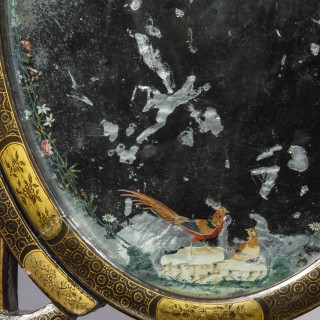 A rare and decorative Chinese export dressing mirror, in black lacquer, exquisitely gilt-decorated throughout, with its original mercury plate, reverse-painted with exotic birds.
Retains its original handles and a label of Town and Emanuel, who retailed it in 1830’s (see below).
Qing dynasty, early 19th century.

Why we like it
A very rare and beautiful piece, unusually having an exquisitely reverse-painted mirror plate.

A very similar example from the collection of The Metropolitan Museum of Art, New York, is illustrated in Carl Crossman, The Decorative Arts of the China Trade, 1991, p. 286, together with a further comparable example.

Town & Emmanuel
In about 1830 Charles Town, artist, and Emanuel Emanuel, a curiosity importer, established Town & Emanuel at 103 New Bond Street and by 1840 the firm was described as dealers in and importers of antique furniture, curiosities and pictures.  By 1842 established as importers and manufacturers of ‘buhl, marqueterie, resner & carved furniture’.

Circular occasional table with porcelain bowl inset in the top, from the Duke of Buccleuch’s collection, noted in the V & A archives as having been sold by Christie’s in 1948, with label dated 183–, and stating: ‘… Town & Emanuel. Manufacturers of Buhl Marquetrie, Resner & Carved Furniture, Tripods, Screens &c. of the finest & most superb designs of the times of Louis 14th. Splendid Cabinets & Tables inlaid with fine Sèvre & Dresden China &c. Old Paintings & Bronzes, Carvings, Oriental & other China, Jewellery & Curiosities Bought & Exchanged. Buhl & Antique Furniture Repaired. By Appointment to Her Majesty’.

Francis Gibson of Saffron Walden, an antiquary and collector, visited the shop in 1835 and 1836 and mentioned in his diary the ‘magnificent furniture’.

The stock in sale catalogue of 1849 included objects from well-known collections; Wanstead (1822), Fonthill (1823) and Stowe (1848); as well as Italian furniture, including contents of Doge Manin’s Palace, brought to England by Gasparoni, a dealer in Milan, and sold to Town & Emanuel c.1835, who sold onto clients such as the Duke of Buckingham (the firm bought back some of this furniture in the Stowe sale of 1848).  Sir Andrew Fontaine, of Narford Hall, also acquired four Italian armchairs (now in Manchester City Art Gallery) from Doge Manin’s palace ‘by a company, on  a speculation’, in the hope of offering them to William IV for Windsor, but the King’s death resulted in pieces being offered to other clients.  Town and Emanuel apparently made £6000 on the disposal of Garaparoni’s collection.

In 1839 sold William Bankes a Venetian ceiling for Kingston Lacey at a cost of £100 and the firm also provided Bankes with measurements and prices for pieces of leather from a Venetian palace; however, he did not purchase these.

The 1849 catalogue included lot 685 ‘A beautiful coffer, of buhl and tortoishell, with ornaments of or-molu’, possibly similar to the pair of buhl tables, based on Louis XIV coffer stands acquired from Town & Emanuel by the 5th Duke of Buccleuch.

The writing table at Burghley ( illus. Collard, Furniture History (1996) p. 85), is attributed to Town & Emanuel and the firm also replicated Louis XV furniture such as kingwood writing table purchased for the Blue Drawing Room at Burghley purchased for £21 in 1836 by the 2nd Marquess of Exeter (illus. Collard, Furniture History (1996) p.86.

Also included in the 1849 catalogue was a ‘Cabinet Pianoforte, in a case of satinwood, with borders of kingwood, the front ornamented with numerous plaques of Sevres, painted with figures and flowers, and turquoise borders, with rich or-molu mouldings’ (lot 583), the State Bed from Stowe (lot 542), an oval looking-glass with richly carved frame probably by W.G. Rogers, and a pair of majolica vases from Fonthill (lot 844) and a large number of French clocks.

After the 1849 sale of stock Josiah Thoms, previously an assistant at Town & Emanuel, and William Luscombe, took over the New Bond Street premises and established Toms & Luscombe. Some additional examples of the firm’s furniture production to those illustrated in Collard (1996) are provided in Gilbert (1996), figs 902-915.