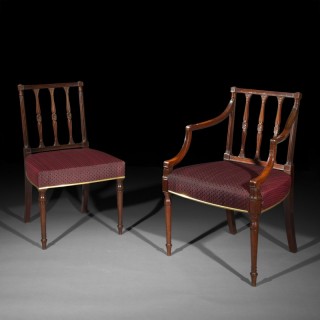 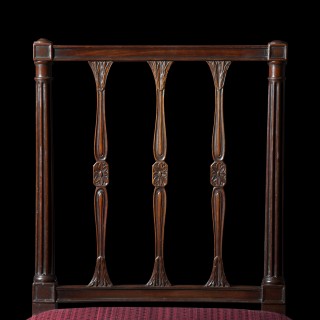 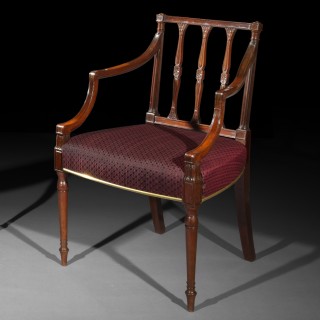 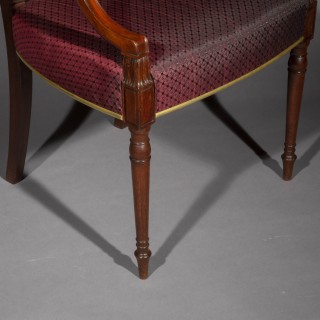 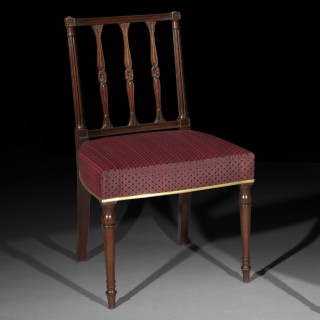 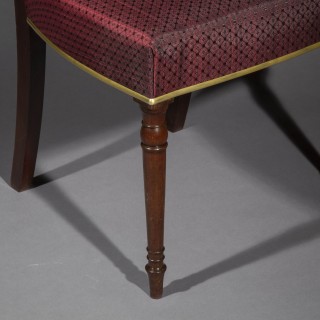 Why we like them
Wonderfully elegant model, looking very delicate but in fact unusually strong – the sign of a skilled craftsman. This ‘Pompeian’ design is the epitome of the late Neoclassicism, introduced into English architecture and interior decoration by Robert Adam in late 1760’s. Absolutely delightful chairs, covered in John Boyd Textiles luxurious horsehair fabric with brass trim. Having been preserved in almost untouched and unused condition, they did not require any serious restoration work except reupholstery.

This set belongs to a group of chairs closely related to a set, supplied by Thomas Chippendale Junior to Sir Gilbert Heathcote, for Normanton Park or one of his London residencies. The chairs, illustrated in Judith Goodison, The Life and Work of Thomas Chippendale Junior, 2017, pp.310–311, display very similar acanthus-carved back splats, that may be seen on other chairs from this group. Other examples include a set eight stamped ‘B.Harmer’, sold Sotheby’s London, 21 March 2003, lot 135 and a further identical and stamped pair apparently from the same set, sold Christie’s New York, 19 April 2001, lot 253. Another comparable set having more simply embellished backs of the same profile as the Normanton Park chairs and front legs identical to our chairs, was sold Sotheby’s London, 30 June 2004, lot 200. Being evidently of the same model, some of these chairs might have originated from the same workshop or were copied from finer examples of the more prestigious makers, such as Chippendale, which was not unusual in the 18th century.

The stamp of the freelance craftsman/journeyman B. Harmer is recorded on several suites of fine quality seat-furniture of this period. Although his full identity remains unknown it is clear that he was a high calibre outworking chair-maker employed by the leading designers and makers of his period, possibly by Chippendale Junior himself.