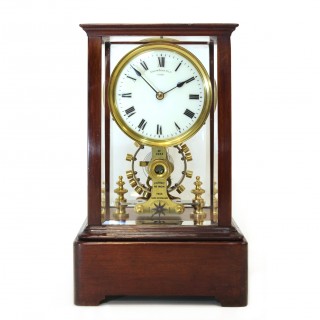 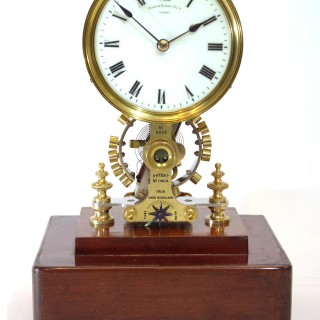 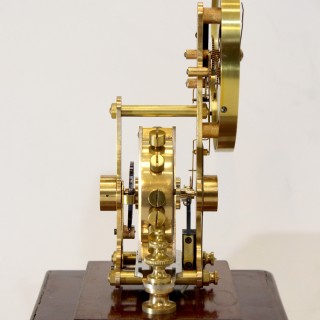 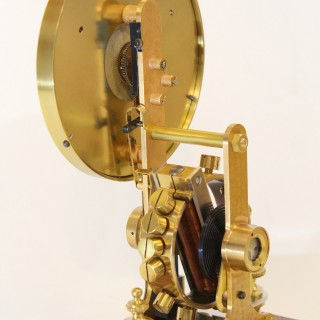 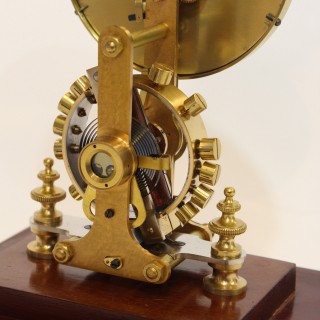 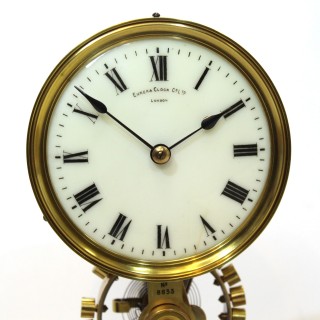 A mahogany early electric five glass Eureka clock with signed enamel Roman dial, the movement numbered 7358 and stamped PATENT NO. 14614, 1906.   MADE IN ENGLAND.

The Eureka mantel timepiece was invented by Timothy Bernard Powers of New York shortly after 1900 and patented in 1906.

The Eureka Clock Company in London, England made these clocks between 1908 and 1914, and it is thought that around 10,000 were made by them before their demise in 1914. The design of the balance is such that a constant voltage (of c.1.5 volts) is required to ensure consistency in the amplitude of oscillation. Unfortunately early 20th century battery technology struggled to deliver a suitably stable output hence such timepieces acquired a reputation for poor timekeeping. Nowadays, good timekeeping can be achieved through the use of regulated cells which provide a much more consistent voltage output.

The circular white enamel dial is in excellent condition with Roman numerals and steel spade hands. It is signed EUREKA CLOCK CO. LTD.

The clock is to be supplied with a regulated battery holder – this takes four standard C batteries, and a potentiometer provides a stable regulated supply to the clock to overcome the problems mentioned above.

Pictured is the identical clock, serial number 8833. The movement of number 7358 is undergoing a full overhaul and will be guaranteed for 3 years.