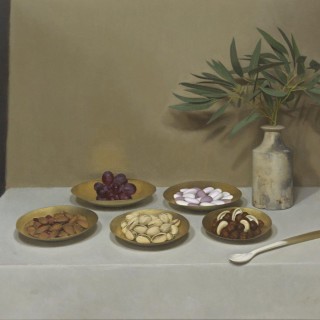 Siân Hopkinson was born in Hertfordshire in 1967. She attended Wimbledon School of Art and graduated in 1989. In her final year she became deeply engaged with the genre of still life, in particular the still life paintings of Spain in the 17th century where everyday humble objects become moving and miraculous. She took particular inspiration from the works Chardin, Velazquez, Manet and Morandi. Shortly after graduating she was commissioned by Euphrosyne Doxiadis to provide 36 pen and ink drawings for her book The Mysterious Fayum Portraits – Faces From Ancient Egypt (London: Thames and Hudson, 1995). She was further commissioned by the author to produce studies from Fayum funerary portraits in the British Museum which Doxiadis used during her lecture tour to illustrate elements of ancient technique. The beauty found in the art of this period continues to influence her today. Her exquisite still life compositions, crafted with such gem like clarity are, in the words of the painter Jeff Stultiens, ‘the product of the sort of intensive search that was once the hallmark of good figurative painting.’ Sian exhibited her own work in and around London, including in many successful solo shows, before finding representation with Panter and Hall. Her work has been exhibited in Amsterdam, Antwerp, Athens and Istanbul, and has sold in both Europe and America.