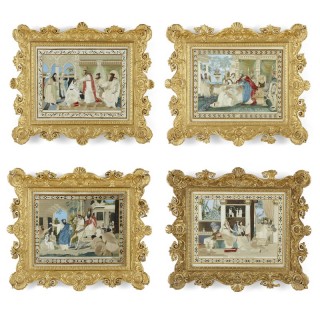 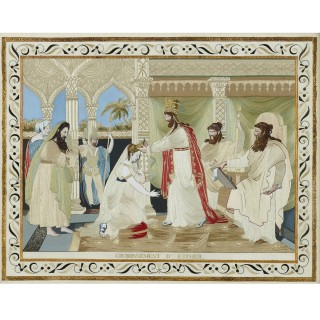 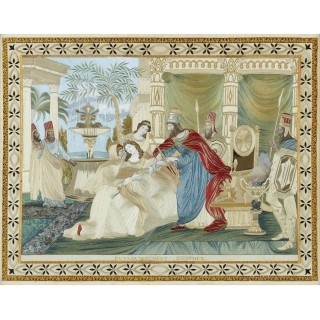 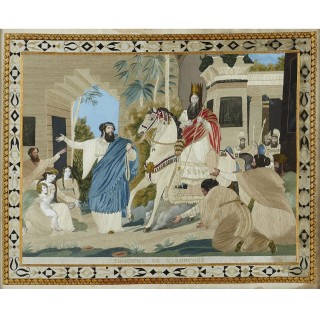 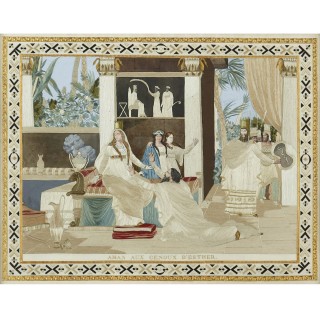 Four Jewish silk embroidered images from the Book of Esther

This set of pictures is made up of four individual works produced using a fine silk stitch upon painted moiré silk ground. Each picture is set within a giltwood frame of an ornamental Rococo style. The silk stitch of the images is embellished by the occasional use of beads, and each picture is edged with fine pressed gilt paper borders. The title of each scene, corresponding to a passage from the Book of Esther, is set along the bottom edge of each image in silk embroidery and is inscribed in French.

The works depict important events from Esther’s life, as described in the Biblical Book of Esther. Esther, the Jewish queen of Ahasuerus, the King of Persia in the early 5th Century BC, is celebrated for collaborating with Mordecai to thwart Haman’s plot to do harm to the Jewish population of Persia. The silk-embroidered title of each picture is as follows: ‘Couronnement D’Esther’ (The Coronation of Esther), ‘Evanouissement D’Esther’ (The Fainting of Esther), ‘Triomphe de Mardochee’ (The Triumph of Mordecai), and ‘Aman aux Genoux D’Esther’ (Haman at the Knees of Esther).

Four Jewish silk embroidered images from the Book of Esther