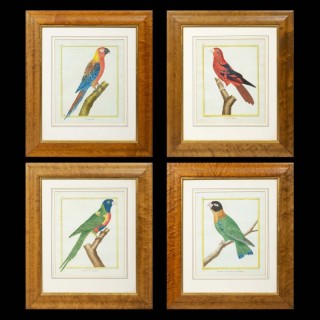 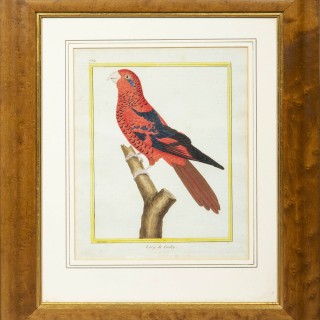 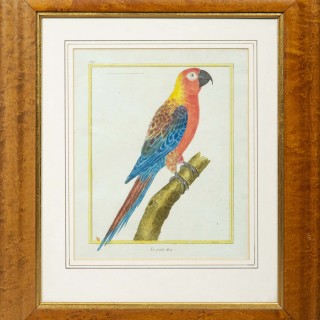 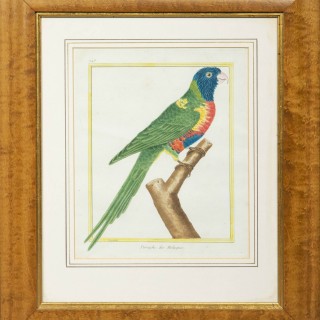 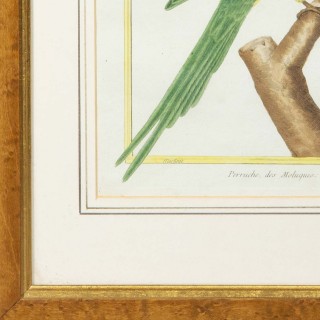 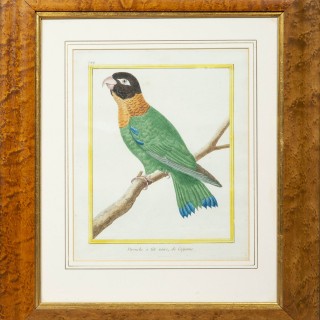 A very decorative set of four of engravings of parrots, by François Nicolas Martinet, from Histoire Naturelle des Oiseaux, 1770–1786.
France, circa 1770–80.

Original hand-colored copper-plate engravings, signed in the bottom of the yellow border, framed in French mats and vintage bird’s-eye maple frames. Exquisitely engraved and hand-coloured in the 18th century, these superb prints evoke the fashion for exoticism in the Enlightenment era Europe.

This exceptional set of hand-coloured engravings is from Georges Louis Leclerc Comte de Buffon’s work Histoire Naturelle des Oiseaux, published in Paris from 1770 to 1786, for which Francois Nicolas Martinet provided all of the illustrations.

Over the course of his splendid career, François Nicolas Martinet (1731-1790?) engraved illustrations of birds for some of the most influential naturalists in 18th-century France, including François Salèrne, Mathurin Brisson, and, above all, Georges Louis Leclerc, le comte de Buffon. Martinet was one of the greatest birds artists of the 18th century. He worked for the French court as an engraver and artist. Martinet’s illustrations are accurate and beautifully artistic.

Histoire Naturelle was the most comprehensive and noted ornithological work of the 1700s. It included a broad variety of birds native to Europe, Asia, and the Americas.