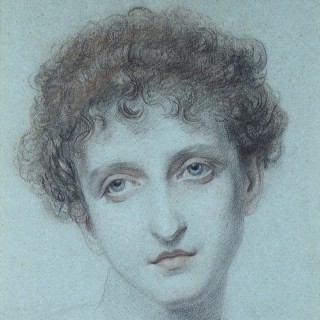 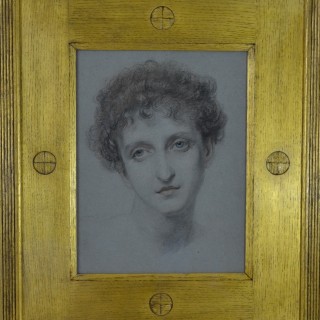 The artist’s estate;
Private collection and thence by descent.

Shields was born in Hartlepool and brought up in extreme poverty with most of his family succumbing to TB. Employed by a commercial engraver he studied at evening classes in London and then in Manchester, where he settled in 1848. He was greatly impressed by the works of the Pre-Raphaelite Brotherhood, which he saw at the Manchester Art Treasures Exhibition in 1857. The quality of his illustrations for Defoe’s History of the Plague (1862) and Bunyan’s Pilgrim’s Progress (1864) brought him to the attention of Ruskin and Rossetti, who invited him to visit him in London. He became a close friend of Rossetti and Madox Brown and settled in London in 1876 and Rossetti offered him spade in his own studio and helped and encouraged him with his work. A close friend of the whole Rossetti family, he was commissioned by Rossetti’s mother to design two windows in memory of her son in All Saints’ Church, Birchington. He was also asked to make a drawing of Rossetti on his death bed. Shields painted mainly in watercolour and exhibited at the Society of Painters in Water Colours, becoming an ARWS in 1865. He was also a fine illustrator, mural decorator and stained glass designer.