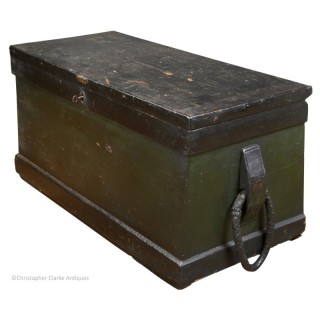 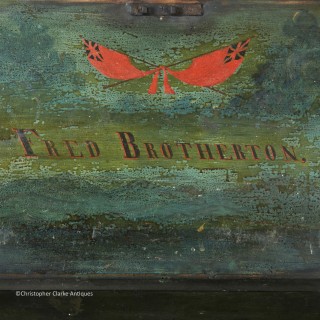 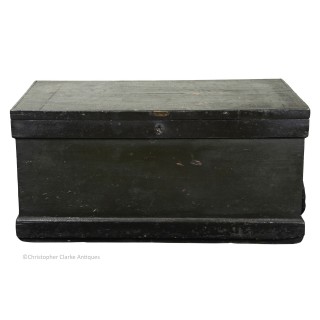 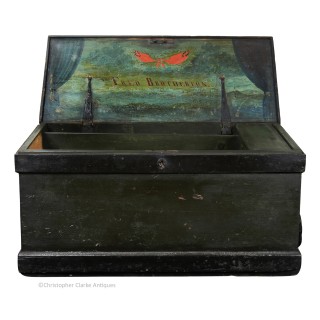 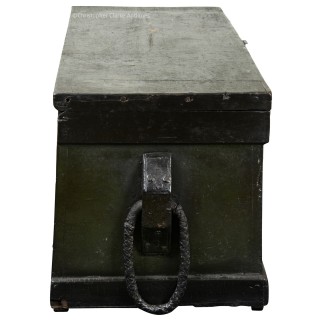 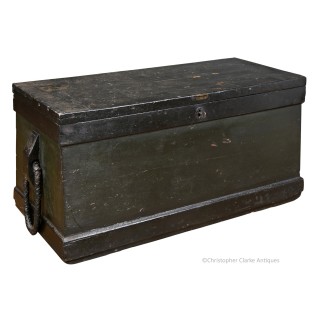 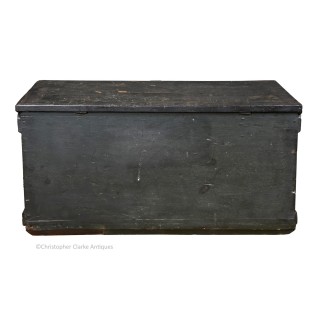 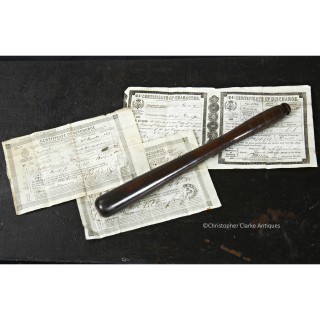 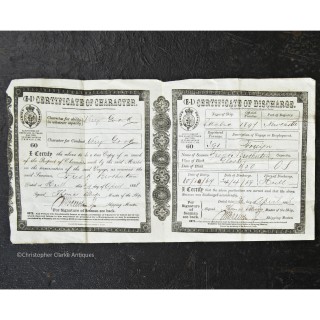 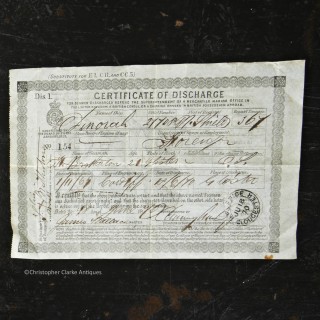 A green and black painted pine Sailor’s Trunk that belonged to Frederick Brotherton.

The trunk is of a common design for use on board ship, although it doesn’t have canted sides. It has rope becket carrying handles, covered in leather, and a candle box to the interior. The lid is held by long iron hinges and the trunk can still be locked with its original key. A small brass lip is fitted to make the lid a little easier to open. The trunk has applied boards to the base to the top and bottom of the trunk and its sits on sledge feet running from side to side, The trunk is rebated to give a good fitting to the top. The owner has personalised the trunk by painting the inside of the lid with tied curtains to the sides opening to a view of the sea with land to the back. To the middle are two crossed red ensign flags on poles with the name ‘Fred Brotherton,’ written in black shadowed in red below.

Brotherton was born in the port of Gloucester in 1850 and went to sea at the age of 17 as an Ordinary Seaman, becoming an Able Seaman a year later. His seven discharge papers from ships accompany the chest along with a mahogany truncheon. In 1867 he sailed on the Idalia for seven months overseas before being discharged at Hull. He re-joined the ship in June of 1868 for another seven months going to the Black Sea and for a third time in March of 1869, disembarking in September of the same year at London. In November 1869 he went to Cardiff to join the Dinorah for another seven month voyage, returning to his home port. He stayed with the ship and a month later, on the 11th of July 1870 sailed with her for seven months to the Mediterranean returning to Belfast. He then joined the Caroline at Gloucester at the end of March 1871 bound for Quebec returning to Gloucester in August of the same year. A month later he was on the Foam from Cardiff to the Mediterranean and back to London on the 31st July 1872. This was the final discharge paper in the trunk and its probable that, after six years at the age of 23, he had enough of the sea. All of his papers confirm his character as very good and perhaps it is because of this that he was always in work, with a maximum of three months in between ships. What he did afterwards is not known although a Frederick Brotherton is recorded as living in Kingsholm, Gloucester in 1918. Whether this is the same man or perhaps a relative, is not known.

It is a bonus to find the sea records of such a trunk with it and they give us an insight into the places that the owner and trunk travelled. Circa 1867.

Good, minor wear as to be expected