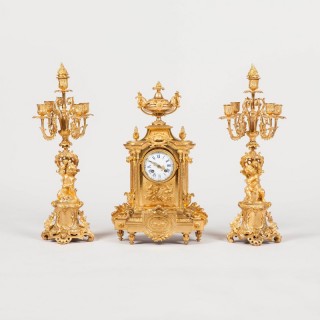 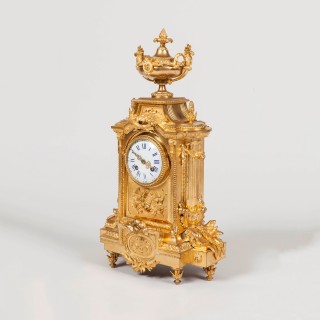 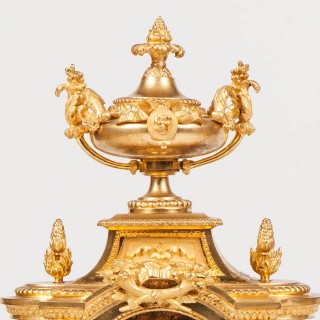 Constructed in two colour ormolu, comprising a richly decorated mantle clock and two candelabra in the late Louis XVI manner; the breakfront form clock rising from foliate adorned toupie feet, having a central panel depicting musical trophies, the enamel dial depicting hours in Roman numerals, and the five minute intervals shown in Arabic numerals; the two train eight day movement strikes the hours on a bell, behind which is the makers mark set in a circle; elongated pine cones flank the sides, and over, a lidded Grecian urn; the side pieces have shaped elliptical bases on which sit putti holding cymbals; over the central column issues four side, and one central candleholder, with a snuffer.
French, Circa 1880

Japy Freres was founded by Frederic Japy (1749-1812/3); their factory was founded at Baderel in 1810, and passed into the hands of his sons, when the company became Japy Freres; later incorporated into Japy Freres et Cie, the firm worked for the whole of the 19th c, and closed only at the outset of the Second World War.