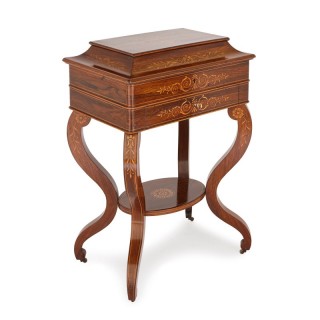 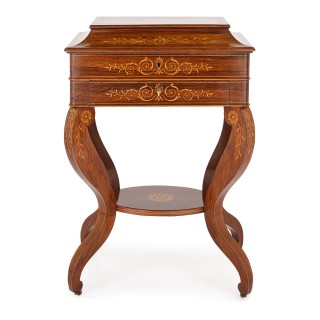 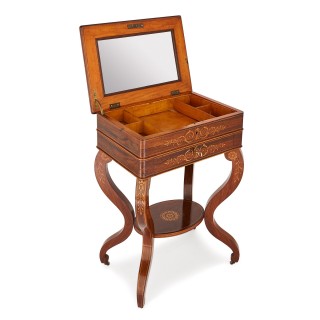 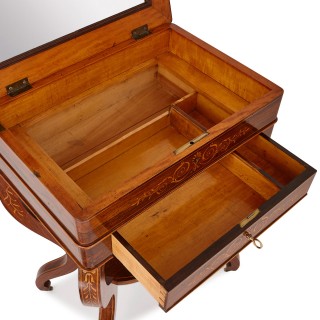 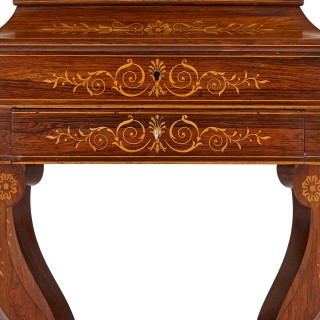 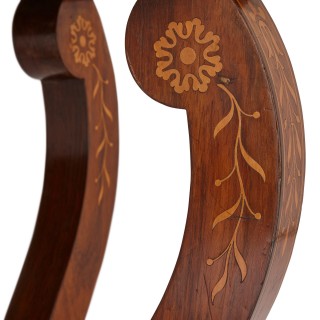 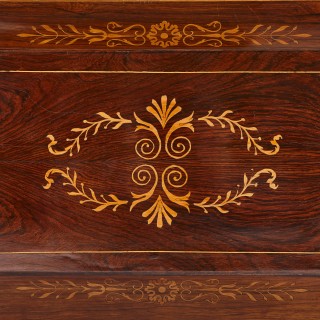 This cabinet was crafted in France at the end of the ‘Bourbon Restauration’ period. It is characteristically ‘Restauration’ in its style, with its curvaceous Neoclassical forms, and fine marquetry work.

The cabinet is comprised of a two-storey body, which is surmounted by a pitched top, with chamfered edges. This top is hinged, and lifts up to reveal the upper compartment, which is divided into five parts (four small, one large). The underside of the top is mounted with a mirror. Directly beneath this, there is a pull-out drawer, which is split into two sections (one narrow, one large), and is lockable. The top, the top’s chamfered sides, and the front of the upper and lower storage spaces, are decorated with light-coloured floral marquetry designs. This light-coloured wood also runs along, and articulates, the edges of the cabinet body.

Four curvy, cabriole legs with scrolled tops support the cabinet body. These are ornamented on their tops with light-coloured marquetry flowers and leaves, and along their edges with marquetry bands. The four legs support an oval-shaped shelf about midway between them. This shelf features a central light-coloured marquetry rosette, bordered by a slim marquetry band. The legs stand on castors, which will allow the piece to be easily moved around an interior.

The cabinet’s variety of small compartments are perfect for storing precious jewellery, or makeup. This aspect, combined with its large mirror, make it an ideal women’s dressing table, which will look beautiful placed in a fine bedroom.