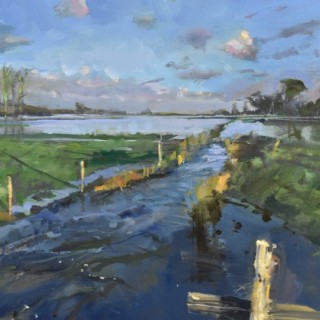 Richard Pikesley was born in 1951 in London, and studied at the Harrow School of Art, the City of Canterbury College of Art and the University of London. He was elected to the New English Art Club in 1974 and to the Royal Watercolour Society in 1997.

Richard regularly contributes to mixed exhibitions in Britain and abroad, including the RA Summer Exhibitions, The Royal West of England Academy, Minton Fine Art in Toronto, the New Academy Gallery in London, Valley House Gallery in Texas, and “The Discerning Eye”. In addition, he has had over 10 one-man shows throughout the UK. In 1991 he was commissioned by Swallow Books to write book on landscape painting in a series edited by Ken Howard. This was published under title ‘The Complete Artist’ bound up with three other titles in series.