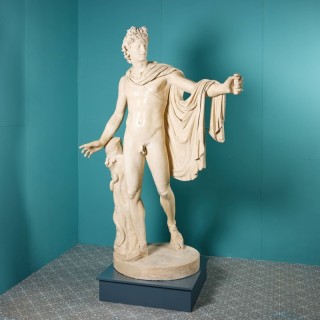 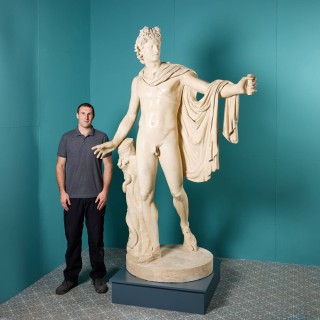 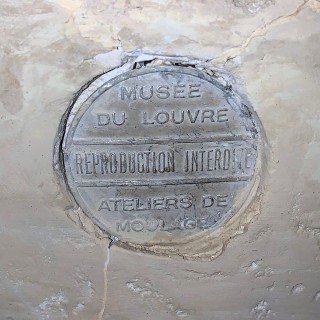 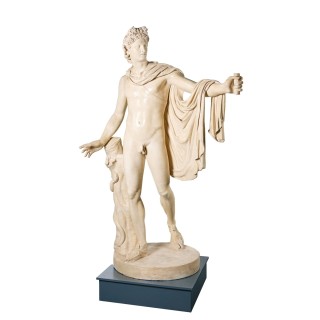 This impressive statue is a full-scale plaster cast of ‘The Apollo Belvedere’ made by the Louvre Museum workshops in the late 19th century. Detailed with a medallion to the base that reads ‘Musee Du Louvre’, the cast is taken from a reproduction of an original in marble currently located within the Vatican Museums, Rome. The original statue – which has been lost for many centuries – is thought to have been depicted in bronze and created by 4th century BC Greek sculptor Leochares between 330 and 320 BC. The size and grandeur of this magnificent plaster Apollo statue makes it quite the statement piece, becoming a talking point in any setting.

In plaster, this iconic statue is showcased in stunning detail, depicting God of Roman and Greek mythology Apollo in a classical pose having just released an arrow from a bow which he originally carried in his left hand. Matching the scale of the lost bronze original made centuries ago, the plaster cast gives an insight into the importance of Apollo in the classical era. According to Greek and Roman mythology, Apollo is considered the most loved of all gods, associated with a variety of themes including music, poetry, the bow, healing and prophecy – just to name a few.
While the lost bronze depiction of the Apollo Belvedere statue is considered the original, its marble depiction in the Vatican Museums is highly admired. Believed to have been made during the 2nd century, it was rediscovered during the 14th century and once formed part of Pope Julius II’s private collection. These statues were transferred to the Vatican on his election where the marble depiction of the Apollo Belvedere has remained since the early 16th century.

This large Apollo Belvedere sculpture is impressed with a medallion into the base reading ‘Musee Du Louvre, Reproduction Interdite, Ateliers De Moulage’. A translation of this text tells us that that this plaster statue is not to be reproduced, making it a rare find, and cast by the Louvre Museum at their Atelier De Moulage; a moulding workshop dedicated to recreating the most iconic sculptures of the world. It would suggest that the marble Apollo Belvedere was once on display in the Louvre Museum. However, it is unclear if this is actually the case.

During Napoleon’s invasion of Italy in the late 18th century, he reputedly ordered states to hand over their art and the Vatican was emptied of its works, one of which may have been the Apollo Belvedere. These were brought back to Paris and situated in what would soon become the Louvre Museum. Upon Napoleon’s defeat in 1815 at the Battle of Waterloo, many of the artworks were returned to their original locations. For this reason, it is highly likely that Apollo’s marble depiction once resided in an early version of the Louvre, if only for a short, unintended period. While we can’t be absolutely certain of this, we can be certain that this plaster cast Apollo statue was made in France in the workshops of the Louvre Museum.