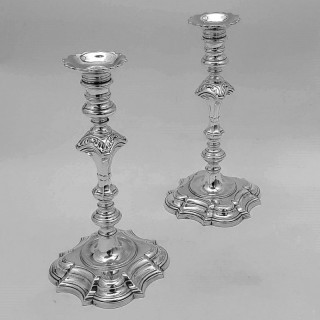 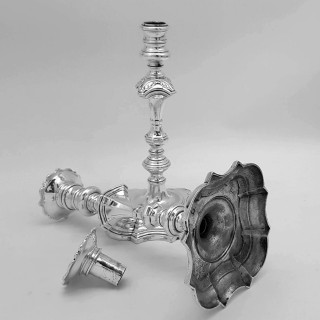 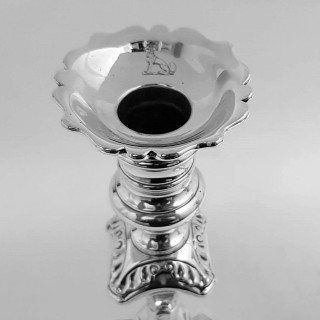 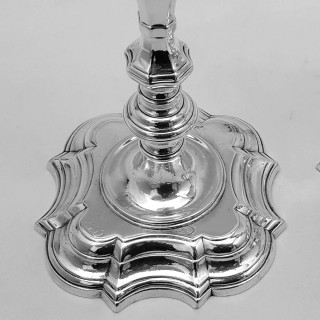 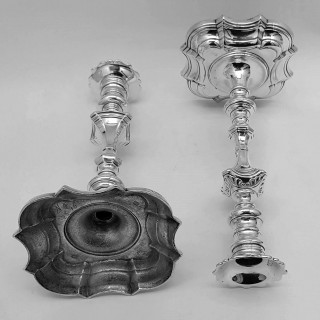 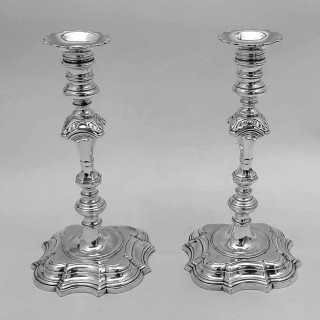 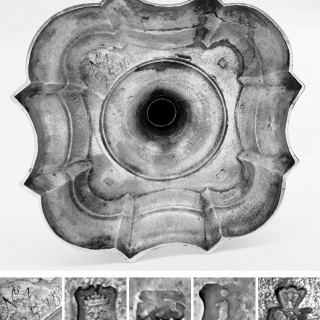 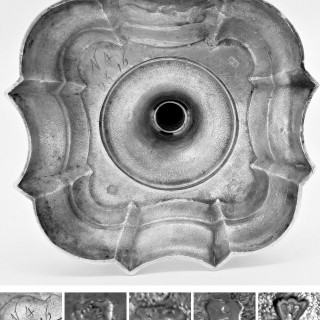 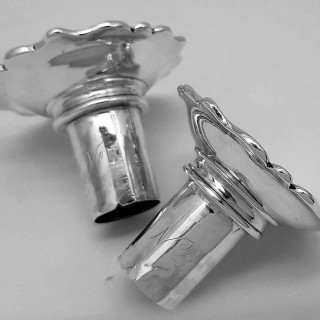 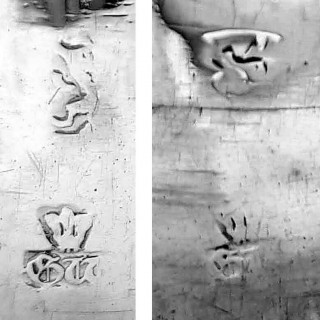 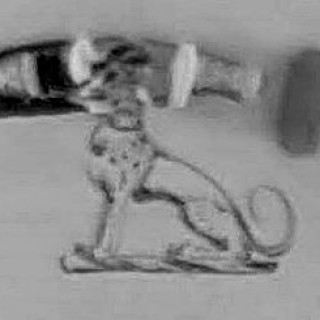 An excellent pair of antique silver candle holders of impressive size and heavy cast weight. Plain design with knopped columns and shaped bases. Good original colour. The nozzles are original and rare for this early date. There is a matching crest engraved to each base and nozzle.

GEORGE WICKES
George Wickes (b. 1698; d 1761), Royal Goldsmith, apprenticed to Samuel Wastell, free 1720. 1st marks 1721-2. 1730-35 partnership with John Craig. 1735 Wickes was appointed goldsmith to Frederick, Prince of Wales and subsequently obtained numerous commissions from royalty, aristocracy and gentry. One of Wickes’s most important works was the Pelham Gold Cup, 1736, designed by William Kent and made for Colonel James Pelham, Private Secretary to the Prince of Wales.
Much of Wickes’s work is in the exuberant Rococo style popularized by the Prince, for example the 170-piece dinner service 1745-7 made for James Fitzgerald, 20th Earl of Kildare (later Duke of Leinster; 1722-73). Such features as castwork in Wickes’ pieces are of equal quality to that made by contemporary Huguenot goldsmiths, for example Paul de Lamerie. Wickes employed a number of subcontractors, the most important of whom was Edward Wakelin, who had virtually taken control of the manufacturing side of the firm by 1747. He supplied Wickes with tableware in the Rococo style, eg the set of 1753 silver-gilt vases at Burghley House, Cambs and an unusual pair of 1755 tureens with wave-patterned and ribbed bodies. In 1750 Wickes took his former apprentice Samuel Netherton (1723-1803), and not Wakelin, into partnership. In 1760, however, on the retirement of both Wickes and Netherton, Wakelin and John Parker (apprenticed to Wickes in 1751) took over the business.

In very good condition. With a full set of English silver hallmarks. The nozzles are original.