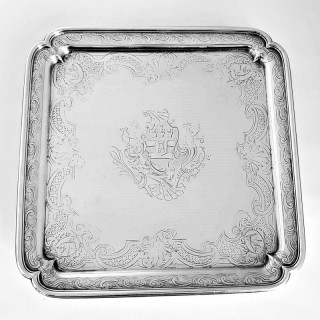 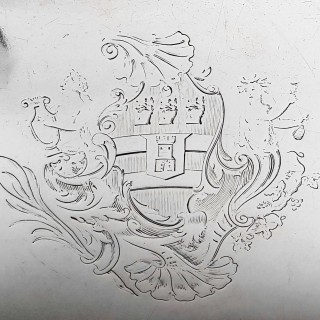 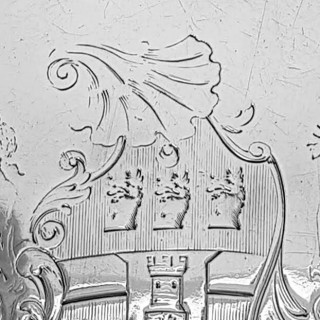 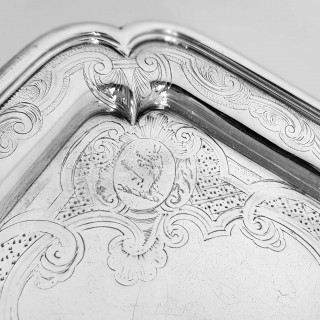 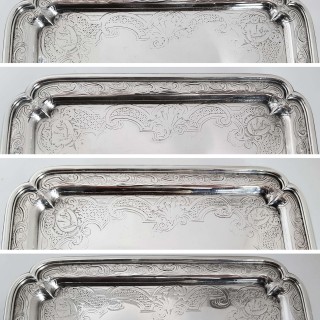 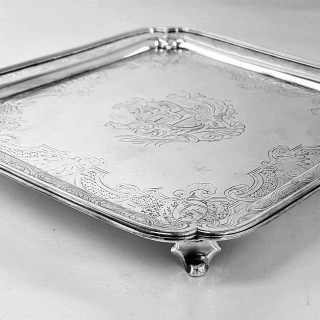 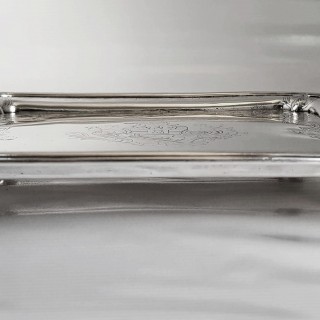 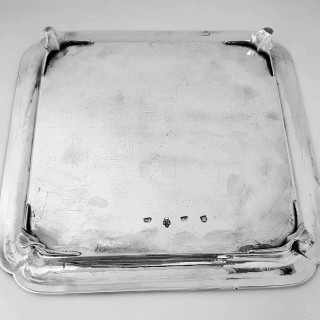 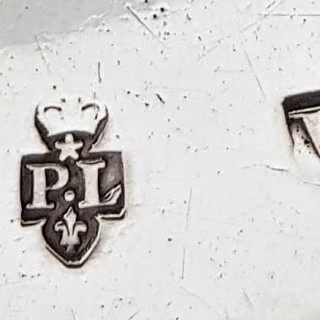 A fine early English silver salver by the celebrated Hugeunot maker Paul de Lamerie. Of square form, and raised on shaped feet, this exceptional salver is hand engraved with an expansive outer border of scrolls and cornucopias having to each corner a roundel containing the crest of a dog pierced with an arrow. To the centre, within a decorative cartouche, is a hand engraved coat of arms.
Weight 664 grams, 21.3 troy ounces.
Width 22.5cm. Height 2.6cm.
London 1735.
Maker Paul de Lamerie.
Sterling silver.

PAUL DE LAMERIE
Paul de Lamerie (9 April 1688–1 August 1751). The Victorian and Albert Museum describes him as the “greatest silversmith working in England in the 18th century”. Born in Bois-le-Duc, his French Huguenot family chose to follow William of Orange to England during the Glorious Revolution. In August 1703, de Lamerie became the apprentice to a London goldsmith of Huguenot origin, Pierre Platel (1659-1739). De Lamerie opened his own workshop in 1713 (1st mark “LA” – Britannia mark) and was appointed goldsmith to George I in 1716. 2nd mark 1733 – sterling mark). He worked in partnership with Ellis Gamble – formerly apprentice to Master William Hogarth- between 1723 and 1728. His early work is in the simple Queen Anne-styles, following classical French models, but de Lamerie is noted for his elaborate rococo style of the 1730s, particularly the richly-decorated works of an unidentified craftsman, the Maynard Master. Leaving his first premises in Great Windmill Street he moved to 40 Gerrard Street in 1738. Here he lived and probably had his shop, his workshops being located in one of the 48 properties he owned in the area. His customers included Tsarinas Anna and Catherine, Count Aleksey, Sir Robert Walpole, Benjamin Mildmay (Earl Fitzwalter and Viscount Harwich), the Earl of Ilchester, the Earl of Thanet, Viscount Tyrconnell, the Duke of Bedford, and other members of the English aristocracy. He also worked for King George V of Portugal. One of his productions to the Portuguese Court was a huge solid silver bath tub lost in the great 1755 Lisbon earthquake. A two-handled silver cup and cover by Paul de Lamerie, dated 1720, was among the wedding gifts of Queen Elizabeth II. Paul de Lamerie ranks as one of the stars of England’s finest period of silver. He was the most prolific silversmith of his time and his fame still lives on today.

The silver tray is in very good condition. Stamped underneath with a full set of English silver hallmarks. The engraving still has definition with a small amount of wear, mainly to the inner edge of the border and the central figures.
Please note that this item is not new and will show moderate signs of wear commensurate with age. Reflections in the photograph may detract from the true representation of this item.