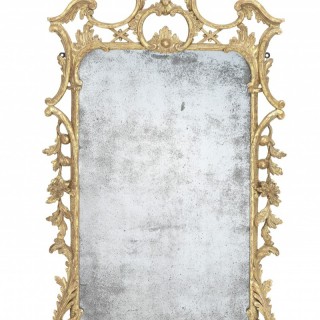 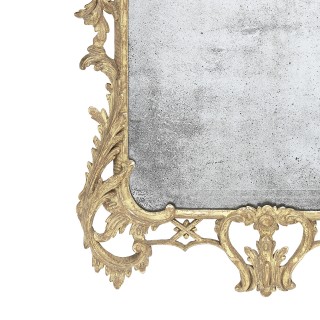 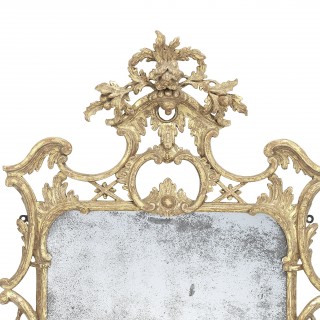 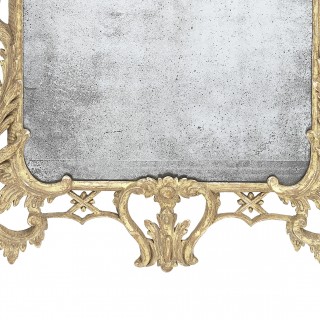 George III Giltwood Mirror in the Manner of Thomas Johnson

An early George III carved giltwood mirror in the manner of Thomas Johnson, circa 1760.

The period mercury mirror plate within a moulded fluted frame is flanked by cascading native flora. The carved upper C-scroll corners are pierced and surmounted by a further scroll which seamlessly flows into the pediment of C-scrolls and flora centred by a rose. Similarly, the lower of the mirror is edged with large scrolls of dripping acanthus leaves and C-scrolls all flowing to the central cartouche.

Thomas Johnson (1714-1778) was a notable British carver, designer and gilder who was born in London. He fully embraced the capriciousness of the rococo style. He was a pupil of Matthias Lock who embodied the harmonious combination of naturalistic motifs and had a tendency towards asymmetry.

Thomas Johnson concentrated his efforts on designs of wall lights, girandoles and console tables which allowed him to play with form and motifs. His designs were more elaborate than his contemporaries, and they were intended to promote his inventiveness rather than for more practical purposes. He first published his designs in the publication of Twelve Girandoles in 1755. His target audiences were cabinetmakers and upholsterers rather than the end-user. This publication was followed by a series of 53 designs published between 1756-1757. Three years later he published A New Book of Ornaments from which only one plate survives though others are known from 19th-century reproductions. One year later the prolific designer produced, One Hundred and Fifty New Designs.

The flora is most likely to be the flowers, leaves and fruit of the fig tree. Figs were imported from France, Spain and Italy to England in the 18th century and were planted on the south walls of stately houses whose aristocratic owners appeared to be the only ones to appreciate them… the lower classes having little regard for figs and often derided them, as in the common saying ‘not worth a fig’. Interestingly, ‘Brunswick’, ‘Brown Turkey’ and ‘White Marseilles’ are still the most commonly grown figs in Britain.

It should be noted that this example is in the most wonderful condition and dates from one of the most celebrated periods in English furniture history ‘ The Chippendale Period’.

George III Giltwood Mirror in the Manner of Thomas Johnson