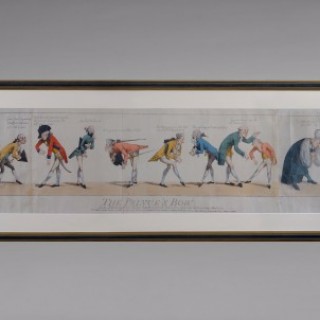 After F G Byron Esq.,(1764-1792), nephew of Lord Byron, the famous poet,“The Prince’s Bow” hand coloured engraving, published by William Holland in London, March 17th. 1788. A wonderfully satirical engraving originally published in three sections, showing 20 figures imitating the Prince of Wales’s Bow before the throne at Westminster Hall. This appears to be at the commencement of the famous trial of Warren Hastings, former Governor of India, by Parliament which lasted 7 years and resulted in his acquittal. The Prince’s Bow was widely reported at the time and was the subject of considerable gossip and mirth. The colouring appears contemporary with the engraving.

Provenance: The property of the Raymond Parker Family late of Fairford Park, Gloucestershire.

Copies of this engraving are held in both the British Museum and also the Library of Congress, Washington, USA.

Details of the engraving, taken from the ‘Catalogue of Political and personal satires’ vol.6, No: 7439 by Mary Dorothy George:

A tall thin man bows, facing a short fat one who says “What do you think of mine, Sir”. The former answers “It won’t do upon my honour”.
An isolated middle-aged man stoops, his l.hand on his back, his r.leg raised, his face contorted with pain, saying “Oh damn the lumbago!”
A tall thin man, whose dress imitates that of the Prince of Wales, bows, hat in hand, saying “Monstrous like the Prince, the very bow dem me”. His stout and ungainly vis-à-vis, dressed in the fashion of c.1760, is a doctor with medicine-phials projecting from his coat-pocket; he bends low, saying “Curse it, I’ve burst the waistband of my breeches”.
A man wearing a sword bows, holding his hat in both hands; he says to his vis-à-vis, a young Irish volunteer in regimentals “Good God, Sir, you should take off your hat when you make a bow!” The other (the first figure on the 2nd sheet) answers “Arrah let a Volunteer alone, my dear, did you ever know a man fire before he presented!”
A stiff, thin man, resembling No. 6718 (Furtado), says to a man who bows from the waist, his body almost horizontal, his long pigtail queue projecting stiffly “You bow too low, Sir” The other answers “And you seem to be spitted, Mr Jew”.
A Frenchman, chapeau-bras and wearing a bag-wig, capers like a dancing-master, saying “Ha! Ha! By gar poor John Bull’s back will ache at this amusement”. His foppishly dressed vis-à-vis stiffly imitates his attitude, saying “These tight stays will be the death of me”.
A plainly dressed man bends towards a boy who bows awkwardly, saying “Vary weel, Sawny, vary like the Prince’s bow!”
A stout and ugly bishop (the first figure on the third sheet) with an ill-fitting wig, bowing obsequiously, his hands on his breast, faces a thin stiff man who looks at him through an eye-glass, saying “It may do for a poor Curate presenting a Petition!” The Bishops answers “Better than yours you Pulpit Prig”.
Burke and Fox, both chapeau-bras, bow facing each other: Burke says “Garrick’s bow at the Shrine of Shakespeare was nothing to it”. Fox answers “This is a certainty something like it”.
Thurlow, in Chancellor’s wig and gown, bows, saying “He takes precedence of me! d—-n his bow!” (cf. No.7320). He faces George Hanger, wearing regimentals, who bows, hat in hand, saying “It would kick up the heels of chastity in Maid, Wife or Widow”

Mary Frampton notes (Journal, p. 16) that the Prince’s bow to the throne at the opening of Hasting’s trial was ‘universally admired’. Cf. No: 7309.

Advertised in the ‘Catalogue’ appended to Jordan’s Elixir of Life as ‘The Prince of Wales Bow: exhibiting 20 characters, imitating the Prince of Wales’s Bow before the Throne, Westminster Hall…Price 7s. 6d. or 13s. 6d.’

This was also displayed at “Hollands” Caricature Rooms, 50 Oxford Street, Nr. Berner’s Street, London, the advert reading that “the rooms were now open, presenting a general Exhibition of all the distinguished Caricatures that have been published in the last Ten years, with many original paintings and drawings of high celebrity. Admittance, one shilling”

Very good, marks and wear consistent with age and use. Full condition report available upon request.