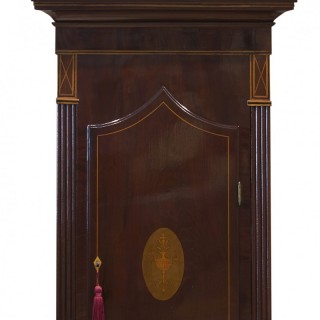 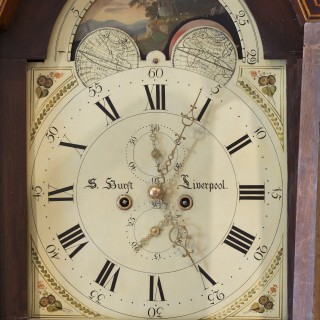 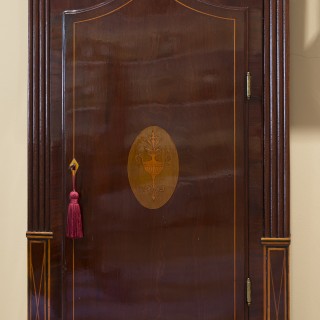 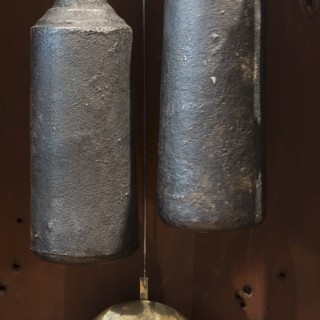 The case is made from the finest Cuban mahogany with wonderful use of flame mahogany to the trunk door and base. It is beautifully decorated with boxwood and satinwood stringing throughout and ‘sheraton’ style inlay work of the highest quality. The trunk has reeded and canted corners, the hood is also reeded giving the appearance of double pillars, a feature of Liverpool clocks. The casework is of the very highest quality to be expected of a Liverpool case, this was no accident, local cabinetmakers would have had ‘first pick’ of the choicest mahogany and vaneers coming into the port in the early 1800’s.

The casework on this clock with so much attention to detail would surely suggest that this was made as a special commission for an important customer. One can imagine this impressive clock standing in one of the recently built Stately Homes for the ‘New Rich’ perhaps one of the Cotton merchants of the day.

The eight day movement is of the finest quality with rack striking. The painted dial is superbly decorated with Moonrollor featuring a rural scene and a ship at sea. It has a subsidiary date dial and seconds dial and is inscribed ‘Stephen Hurst, Liverpool’ with original finely cut brass hands. The clock retains it’s original weights and pendulum bob.

Brian Loomes authoritative book ‘Watchmakers and clockmakers of the world’ lists Stephen Hurst as working in Liverpool from 1806-1813. ‘ Lancashire clocks and clockmakers’ notes that Liverpool museum have a pocket watch which is hallmarked 1806 by Stephen Hurst. It also lists three other men named Hurst working as clock and watch makers in and around Liverpool from 1778-1856, presumably all of the same family.