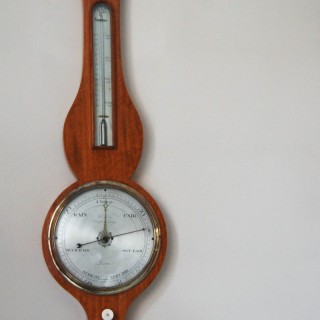 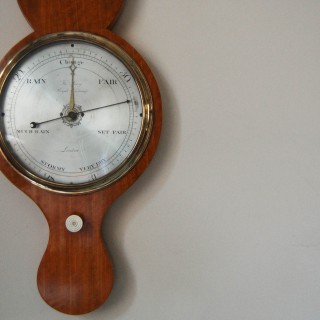 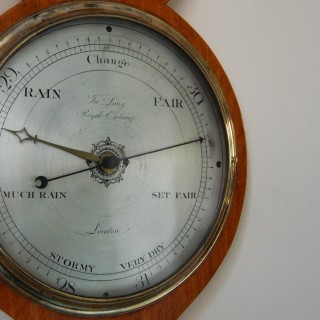 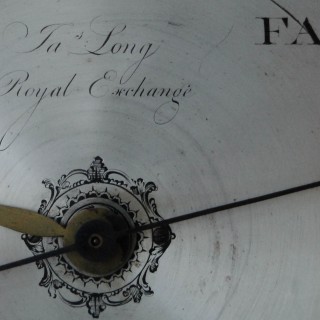 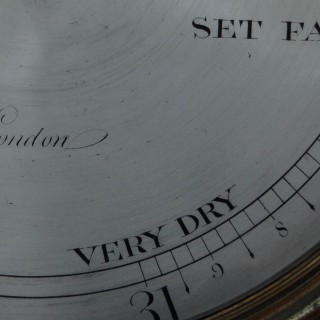 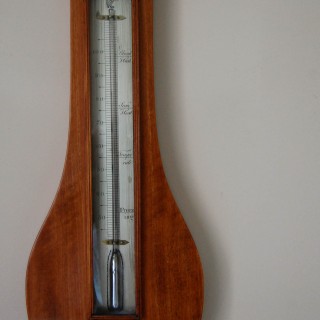 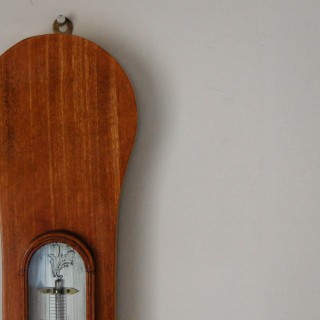 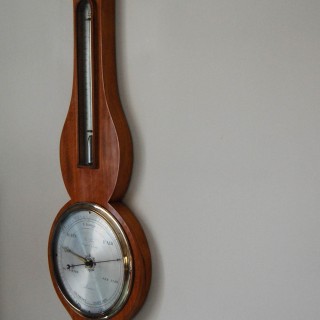 Comprised of a satinwood veneered body with a simple combination of an 8” dial and thermometer, this short lived design of the latter part of the eighteenth and the early part of the nineteenth centuries is somewhat or rarity. The lack of the hygrometer at the top, the lengthy 13” thermometer, the flat glass (as opposed to convex) and the horizontal weather indications, not to mention the choice of materials are all features that are seldom seen.

The barometer retains its original silvering to the Fahrenheit thermometer and dial, with the latter measuring a short scale of 28 to 31 inches of barometric pressure. The centre of the dial shows a restrained but expertly crafted engraving and is further engraved to the maker, “Jas Long, Royal Exchange, London”.

Long, the maker of this fine instrument, had perhaps the best schooling that an aspiring instrument maker of the period could have asked for, being apprenticed to the famous Edward Nairne in 1769. He would have counted James Ayscough and Thomas Blunt (of the later Nairne & Blunt partnership), amongst his peers and fellow apprentices and it is suggested that the equally famous Jesse Ramsden may have also worked for Nairne at some point during this period.

He was freed of The Spectacle Makers Company in 1781, somewhat later than the usual 7 years but seems to have immediately gone into business in his own right at the Royal Exchange, an address he was to keep for the rest of his career. Although, little is known of Long’s thirty year career, (he died in 1811), his good standing allowed him to become Master of the Spectacle Makers Company from 1805 to 1807.

Following his death, the business was succeeded by a Joseph Smith and continued until 1857 whereafter it became Charles Smith & Son until its closure in 1888.

A super example of a rare satinwood wheel barometer from this period.