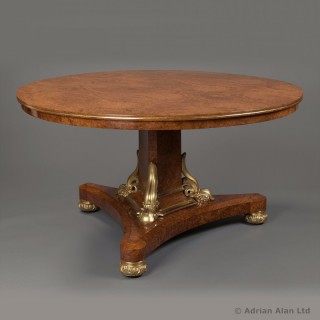 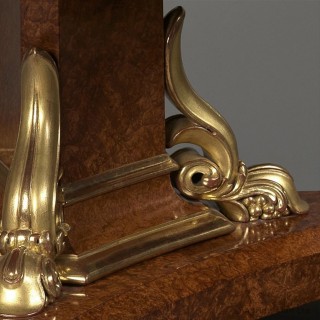 The table is of finely figured Amboyna with a circular tilt-top above a triform column with parcel-gilt scrolled supports. It is raised on a conforming plinth base with foliate carved feet and concealed castors.

George Seddon was the eighth child of John Seddon of Blakelea, Lancashire. His father apprenticed him to George Clemaphon of Cripplegate to learn cabinet making. He became a master cabinet maker. (He was Master of the Joiner’s Company in 1795).

In the early 1750s he was sufficiently successful to acquire London House, Aldersgate Street. It consisted of extensive workshops, where furniture was made, and showrooms to display the finished products. London House had formerly been a palace of the Bishops of London. The panelled state-rooms were ideal for the display of fashionable furniture; and the chapel and library made convenient workshops. When Seddon married, he converted the garden house and infirmary into the family home. Seddon was the biggest furniture maker of his time. His furniture store covered a two acre site in Aldersgate Street.

His workshop there was described by London visitor Sophie v. La Roche in 1786:

“We drove first to Mr. Seddon’s, a cabinet-maker,…He employs four hundred apprentices on any work connected with the making of household furniture—joiners, carvers, gilders, mirror-workers, upholsterers, girdlers—who mould the bronze into graceful patterns—and locksmiths. All these are housed in a building with six wings. In the basement mirrors are cast and cut. Some other department contains nothing but chairs, sofas, and stools of every description, some quite simple, others exquisitely carved and made of all varieties of wood, and one large room is full up with all the finished articles in this line, while others are occupied by writing-tables, cupboards, chest of drawers, charmingly fashioned desks, chests, both large and small, work- and toilet-tables in all manner of wood and patterns, from the simplest and cheapest to the most elegant and expensive.”

Seddon suffered three disastrous fires at London House. At the time of the first fire in 1768 he had unfortunately omitted to pay his annual insurance premium and had to meet the losses from his own pocket. During the third fire in 1790 his youngest daughter was burnt to death.

About 1785 his sons Thomas Seddon (1761–1804) and George Seddon (1765–1815) became partners in the firm, which was re-named George Seddon & Sons. From 1790 to 1795, his son-in-law Thomas Shackleton was also a partner, and the firm was called George Seddon, Sons, & Shackleton. Seddon died in 1801 leaving property valued at almost £250,000. His sons continued his policy of fine traditional craftsmanship, side-by-side with factory methods.

In 1815 Thomas’s son Thomas Seddon (1792–1864) took over the business. Two years later his brother George Seddon (1796–1857) joined him. By 1827, Thomas II had retired and George III formed a new partnership with a cabinetmaker and upholsterer called Nicholas Morel and the firm was called Morel & Seddon. One of their contracts was to make furniture for Windsor Castle. In 1830 George’s brother Thomas III joined this partnership. After 1833 the name of the business reverted to Seddon & Sons. The firm finally closed in 1868.