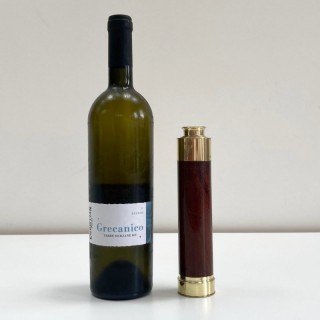 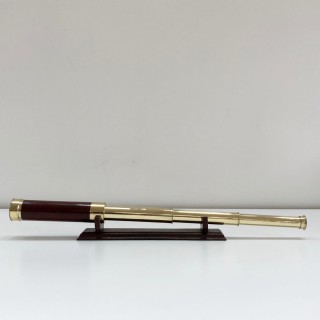 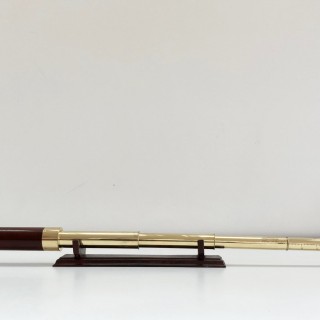 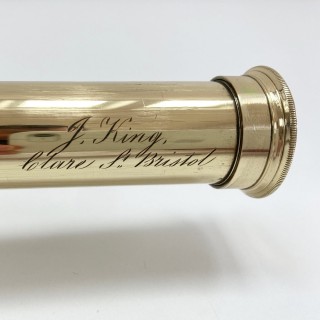 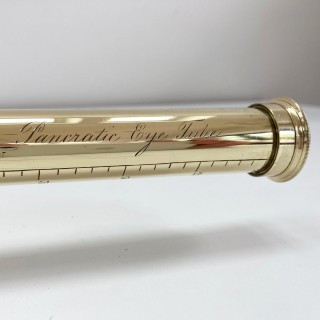 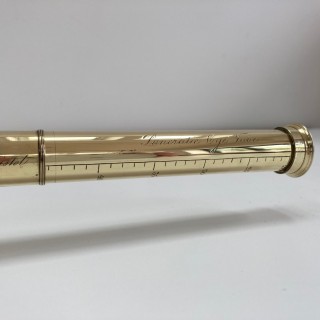 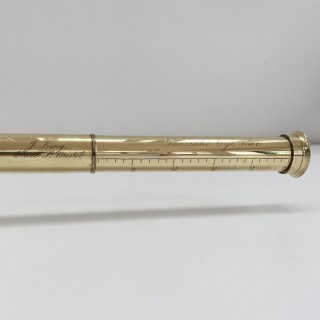 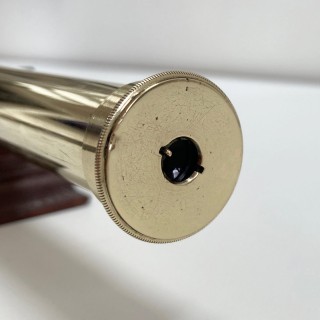 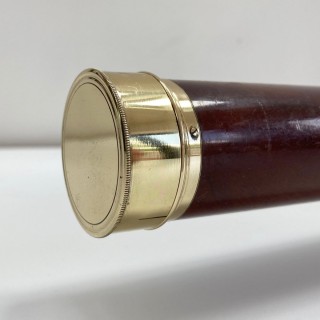 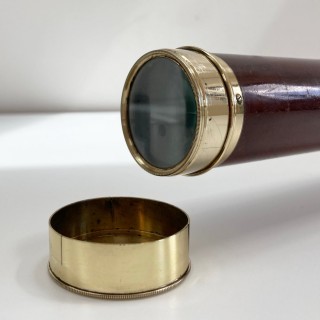 Comprised of a flame mahogany barrel with three draws measuring 56cms extended and 19cms closed. The one and a half inch objective lens retains its original dust cap and the ingenious dust slide of the eyepiece also doubles up as a sun filter when in the closed position.

What may be considered as the smallest draw is engraved to, “J King, Bristol” but this telescope has a neat little secret. By unscrewing the eyepiece halfway off and pulling the end, an additional pancratic eyetube can be released and extended from the smallest draw. As per Kitchiner’s design, the brass is engraved with a magnification scale reading from 20 – 45 and is further engraved with “Pancratic Eye Tube” along the side.

Conceived by renowned optician, inventor and cook, William Kitchiner (a fascinating man who is also considered to be the inventor of the potato chip or crisp) to increase magnification of the standard telescope, the manufacture of his invention seems to have been entirely gifted to The Dollond family whose optical work Kitchiner is known to have admired. Why King was manufacturing this invention is somewhat of a mystery but it is likely that it was not legitimately approved by Kitchiner himself although the invention is likely to have been known by many in the scientific community by 1820.

Kitchiner described his invention in detail within his 1824 publication, “The Economy of the Eyes” but the less lengthy and earlier passage taken from The Philosophical Magazine of 1820 is worthy of reproduction to provide a contemporary explanation:

“Particular respecting the Pancratic Eye-Tube invented by William Kitchiner, MD., Author of “Practical Observations on Telescopes, Spectacles etc, made only by Dollond of London.

It has long been known that the magnifying powers of telescopes could be augmented by increasing the distance between the two glasses next to the eye, and the two that are next to the object glass, to almost double the power of the eyetube in its usual form, ie from 30 to 55. This is the utmost that opticians have at any time accomplished; yet this variation is so desirable, that I think it only requires to be generally known, to be generally desired.

“A few months ago, I saw an eyetube, made by Mr Cauchoix, with a scale of magnifying powers from 25 to 73; but upon trial, I found the vision was good only between 35 and 45. My attention was strongly excited by the idea of one eyetube effecting the whole business of magnifying; and after several experiments, I combined lenses of such proportions that they admitted of being separated from each other so as to magnify at one extremity, more than double they did at the other, the vision continuing uniformly distinct to the extreme edges of the field of view.

Having now done more than was previously effected, I brought it to you. The great approbation you expressed of what I had done, so encouraged me, that I applied unceasingly, determined to perfect the object in view, which I have now accomplished.

I beg to present to you the following accurate measurement of the powers, and faithful account of the performance of THE PANCRATIC EYE-TUBE, which gives a neater and better defined image of a fixed star, and shows double stars decidedly more distinct and perfectly separated, than any other eyetube, and will enable the observer to determine the distances of these very delicate objects from each other in a more perfect manner than has been possible heretofore.

This eyetube applied to the achromatic refractor of forty four inches focus, produces, in the most perfect manner, every imtermediate degree of magnifying power between 100 and 400, the vision continuing uniformly distinct to the extreme margin of the field of the telescope.

The tube is graduated; and the change from one power to another may be made instantaneously, even in the dark, with the utmost facility and certainty. It is presumed that the advantage of my Pancratic Eye-Tube over common magnifiers, in variety of effective magnifying power, convenience and portability is as 300 to 1.

This eyetube is applied to the telescope in the same manner as other eyetubes, and is adjusted to distinct vision by the same pinion motion. For the lowest magnifying power, the whole of the tubes must be shut up; and when the magnifying power is to be increased, the smallest of the sliding tubes, A, must be drawn out to either of the numbers engraved upon it; care being taken not to draw out any part of the other sliding tubes, B and C, until the whole of the first A, is pulled out; the second tube B, may then be drawn out to either of the numbers engraved thereon; and in like manner the third tube. The numbers denote the magnifying power of the telescope.

To change the power, for any less power than the one to which the tubes have been drawn out, the reverse of the above described mode of proceeding must be observed; and the largest tube must be returned first, and so on, until they have been brought back to the number required. Each alteration of the magnifying power will require a new adjustment of the pinion; and as the magnifying power is increased, the distance between the eyeglass and the object glass must be diminished”.

The exact date of Kitchiner’s invention is not entirely clear. From his writings, he was certainly working on the eyetube in 1819 and he wrote in 1820 to Sir Joseph Banks – President of The Royal Society where the above extract was read at a Royal Society meeting on the 20th of April. Just how long it took the Dollonds to start manufacturing is unclear but it is certain from Kitchiner’s later publication in 1824 that it was then available for purchase from them.

The King business has in itself some claim to London beginnings. It originated from a number of successive instrument making businesses. The first was John Wright who was apprenticed to the famous London maker, Benjamin Cole and later set himself up at St Stephens Lane, Bristol. After a short tenure, the fledgling business was taken over by Joshua Springer in 1759 whereafter he moved the business to Clare Street in 1775.

Springer retired after fifty years of trading and was succeeded by Charles & Richard Beilby in 1808 and at some point during this tenure at Clare Street, our maker John King Senior joined the business as the Beilby’s foreman. His length of service with the Beilbys is unclear but in 1821 King himself succeeded to the Clare Street business and ran it as his own concern until 1823. At this point, his son John King Junior joined the business and it was renamed John King & Son. The transition from John King to John King & Son is important as it provides some good evidence for this telescope’s manufacture. The pancratic eye tube was invented in 1819 and so it is reasonable to assume that this was created between 1821 and 1823 whereafter the company name changed.

The King business continued to thrive through the first half of the Nineteenth Century and it was eventually passed to John King Junior’s son Thomas Davis King in 1848 and just three years later, he had opened secondary premises at Denmark Street and had also ranked amongst the Exhibitors of The Great Exhibition for which he was awarded a prize.

Thereafter a short partnership as King & Coombes existed until 1853 and just five years later, TD King emigrated to Canada and the business was continued at the Denmark Street Premises as Husband & Clarke, a partnership that lasted until 1870 and then subsequently continued under the sole name of Husbands. It continued to operate in Bristol until the early Twentieth Century. During this time, the Bristol Company exhibited at the majority of the World Exhibitions.

That a regional maker such as John King Senior was making this invention is interesting. John King’s business became John King & Son in 1823 so this example ranks amongst the first examples of its manufacture. Given also that the Dollond family seemed to have been gifted sole rights by Kitchiner, the appearance of the pancratic eyetube in Bristol is somewhat unusual. The way in which it is manufactured may suggest that John King was less inclined to publicise this practice. It is very easy to examine this instrument without necessarily discovering this neat trick of design therefore it may be considered that it was made to Kitchener’s designs for a client but with some serious consideration for the Dollond’s propensity to take other instrument makers to court as they had done famously in the mid-Eighteenth Century.

A fabulous and very interesting piece of optical history from a renowned regional maker of the period. Given the short trading period, instruments signed to John King alone are less commonly encountered.