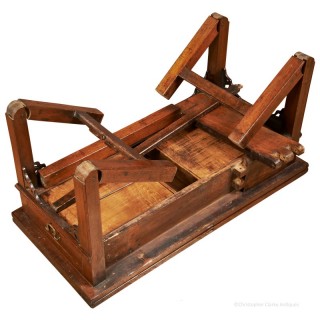 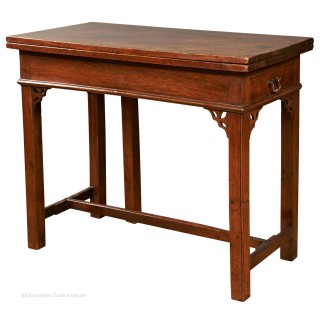 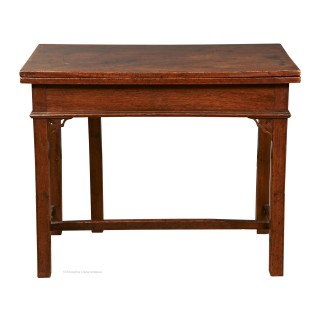 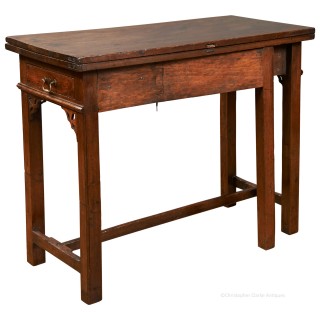 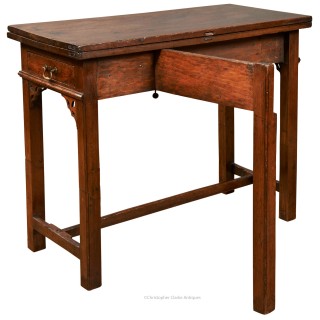 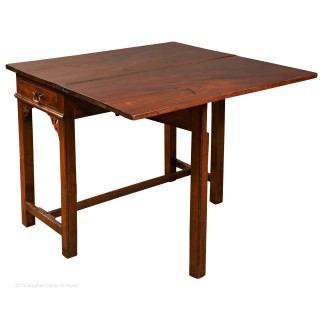 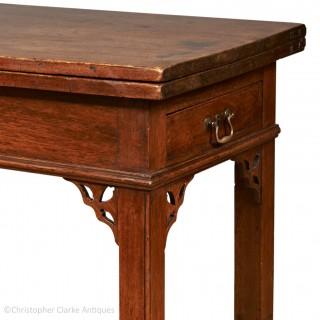 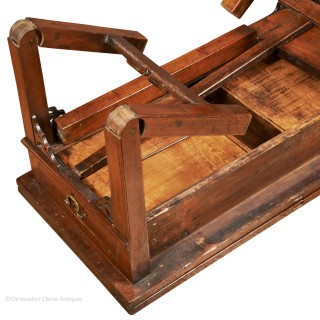 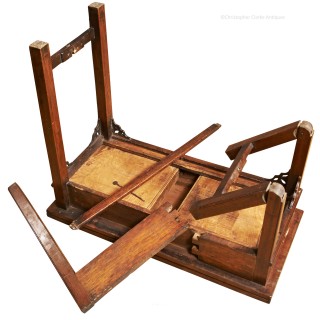 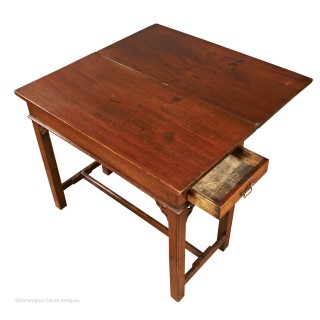 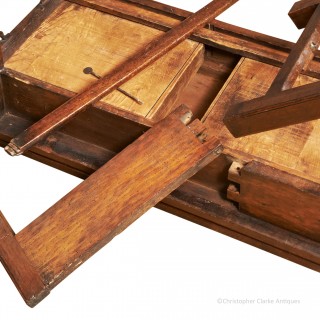 The design of this table is interesting in the way that it is made to partially collapse, which is indicative of its age. The legs have knuckle joints halfway up their height and are prevented from folding by the central bar that unites the side stretchers. Once removed the legs will fold as two pairs. The curiosity is that you can only reduce the table’s size by halving its height. With later tables, the legs are more likely to be hinged higher up or to unscrew to pack down more comprehensively. Why didn’t the cabinet maker of this table simply fit the knuckle joints higher up the leg? In doing so, he would have had to make one pair of legs narrower in width than the other so that they would sit side by side when folded. This would lead to all sort of other issues that would add complications. It is likely that the table originally had a packing case, and if it was made to also house a chair etc., the legs didn’t need to fold more than they do.

A simple system for removing the gate leg, which supports the extended top, was conceived. It also has a knuckle joint to its rail with a central thumb bolt steel pin threaded to one end. Its removal allows the separation of the leg from the table. The hinged top doubles the table’s size making it close to square. It has a low tenon to the middle of one half with a mortice joint to the other to help locate its position when open. There is a drawer to each end with a brass swan neck handle. The table has a moulding to the bottom of its rails and decorative fretwork corners to the top of the legs. The outside corners of the legs are rounded with an incised mould line either side.

Few campaign tables of this earlier age come onto the market. Brawer illustrates a comparable example by Anthony Eckhardt, patented in 1771, and in the V&A’s collection. His patent stated ‘A new portable table with double or single folding flaps and folding feet’. He also designed a chair to accompany it. His table has legs with similar knuckle joints part way up the leg but it is difficult to see what prevents their folding. The design of the two tables is interesting for its place in the development of portable furniture and for the considerations that would have vexed the makers. Eckhardt described his table as ‘laying in the compass of a small box, which would be of the greatest of use to His said Majesty’s navy and army’. It has a good colour and, as Eckhardt also noted, is useful ‘for serving tea, playing cards or writing’. Circa 1760.