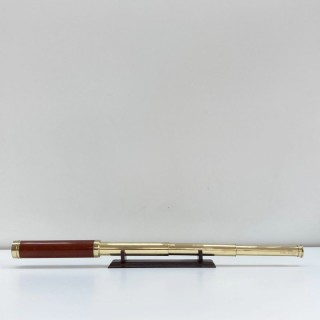 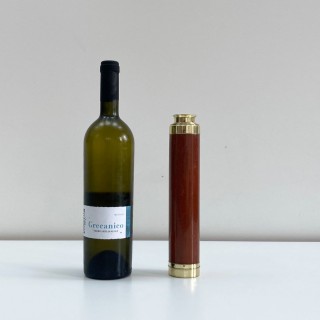 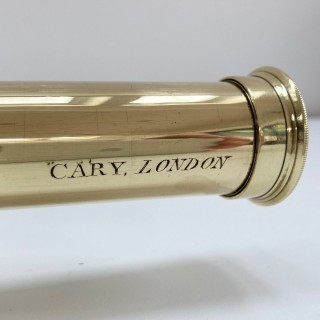 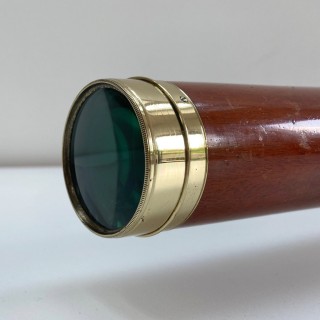 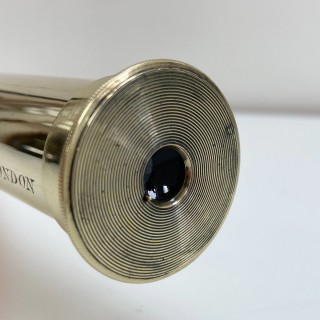 For sale, an early Nineteenth Century three draw telescope by Cary of London

The telescope measures 76cms extended, 24cms when closed and has a one and three qurter inch objective encased in a mahogany barrel. The first draw is nicely engraved with the maker’s name, “Cary, London” and the eyepiece has its original dustslide cover. A simple yet finely manufactured telescope from this renowned family.

The Cary dynasty were highly regarded instrument makers of the late eighteenth and nineteenth centuries, the two brothers William and John forming a partnership manufacturing both scientific apparatus and globes from the London address of 181 & 182 The Strand. William had previously served his apprenticeship with the hugely renowned London instrument maker Jesse Ramsden whilst John was a trained mapmaker. A devastating fire in 1820 led to the brothers combining the two businesses into a single premises at 86 St James Street although throughout the 1820’s they seem to have individually occupied various premises on The Strand in addition to the former.

William Cary died in 1825 leaving generous sums of money to his brothers and his immediate family and his nephews George and John Jr Cary continued their Uncle’s business initially at their father John’s original address at 182 The Strand and then later moving to 181 The Strand in 1828 suggesting that they had re-occupied both original premises after the fire. As before it separated the map making and scientific instrument businesses apart but maintained close proximity.

Having both been brought up and trained as map-makers and lacking the training and skill of their Uncle, the brothers maintained the services of Charles Gould, William Cary’s foreman and it seems likely that Gould was largely responsible for running the scientific instrument making arm of the family businesses from this point. Gould was responsible for the invention of the historic Cary-Gould microscope and given the freedom that he was given to advertise his name in association with the instrument, it is sensible to assume that he operated with a significant amount of freedom from the new owners and with a significant amount of goodwill from John Cary senior.

John Cary senior eventually died in 1835 also leaving the other side of the Cary business to his sons and advertisements from the period suggest that it is likely that they both graduated to map and globe making leaving Gould and his son Henry to support the instrument making business with Henry becoming operational successor upon his father’s death in 1849. John Cary Junior’s death shortly after The Great Exhibition in 1852 resulted in George Cary divested the instrument making to Henry Gould in its entirety but historic allegiances and/or business acumen probably led to the maintenance of the William Cary name until Henry Gould’s eventual death in 1856.

By 1861, Gould’s widow Charlotte seems to have changed the name of the business to become “H. Gould, Late W, Cary” but shortly afterwards formed a partnership with Henry Porter in 1863. At this time advertisements show the name, Gould & Porter (Late Cary) and continued in that vein beyond Charlotte’s death (in 1865) until 1874 whereafter Porter used Cary & Co or his own name with the addition of “sole successor to William Cary”.

Upon Porter’s death in 1902, his sons Sydney & Clement maintained the business and under their stewardship, won a silver medal at the St Louis International Exposition however the business had ceased to exist by 1930, probably having suffered from the hardships of the First World War.