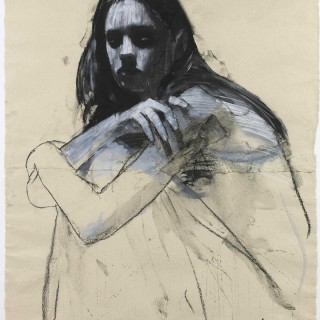 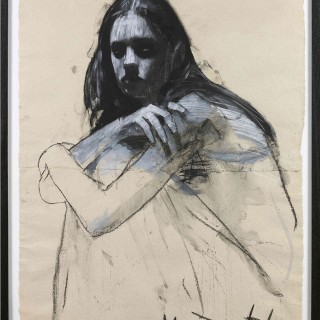 Mark’s journey to being one of Britain’s leading figurative painters was far from conventional. His formative years were spent amidst the sights and sounds of Manchester’s Meat Market at his father’s family butchery and meat packing business. Absorbed in the noise, smells and sheer physicality of this environment, young Mark learnt more about the structure of sinew, bone and flesh, albeit livestock not human, than in any subsequent life drawing class. As a teenager, passionate about pursuing an artistic career, Mark completed two foundation courses, at Oldham and Rochdale colleges of art. However, in the 1980s conceptual art dominated the mainstream market and there were slim pickings for a young determinedly figurative painter in Manchester. Forced back to the wholesale butchery Mark continued to attend life classes religiously throughout the next decade. In the early 1990s the family business fell to the recession and Mark was spurred on to find a commercial outlet for his work. To buy time to build a portfolio he worked as an art technician at an Oldham grammar school for ten years. A short course at the Slade gave him an opportunity to tour the London galleries with his portfolio but with Brit Art in the ascendency he found good drawing very much out of favour. Luckily a local gallery had the foresight to offer him space in a mixed show and he sold six works at the opening. Mark gave notice at the school soon after. His subsequent rise in the art world is gratifying to those of us who admire that increasingly rare talent of good draughtsmanship. Mark’s w ork has developed from a fascination with this form and an obsession with classical themes. These preoccupations can be seen in recent paintings where his detailed observation combines with surface texture and carefully balanced compositions to create a beautiful and powerful representation of the figure. In recent years Mark’s reputation has flourished, such that he has become one of the most popular figurative artists working in Britain today. His powerful depictions of the human form in have sparked a renaissance of interest in traditional life drawing amongst the art collecting fraternity. This immense technical ability is tempered by the natural sensitivity with which he imbues each subject. Although isolated in the picture plane, each model seems to live and breathe, their expression and poise conveying a sense of narrative that invites the viewer to ask more questions about them than the artist answers. Collaborations have involved the model Erin O’Connor, Marianela Nuñez, a Principal at the Royal Ballet and most famously a 21st birthday exhibition for the actress Emma Watson. In a contemporary art market seemingly obsessed with conceptual art, Mark’s work is a timely antidote. Mark’s awards include The Lyceum Prize and The Sidney Andrews Scholarship and his work is included in many important collections. Current demand for his work reflects his growing reputation and his recent exhibitions across the UK have served to establish him as one of today’s outstanding talents and best-selling artists.