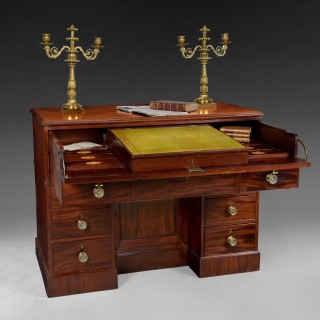 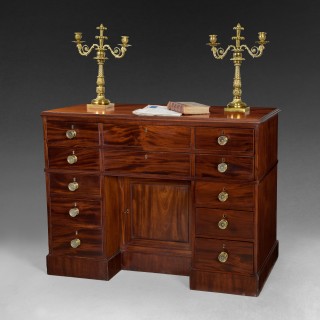 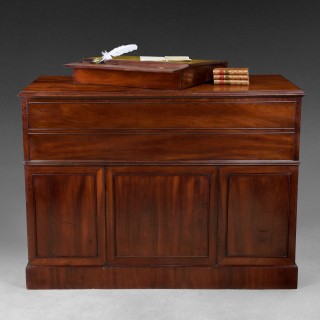 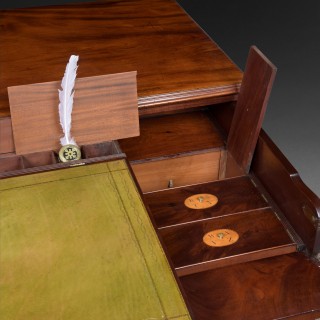 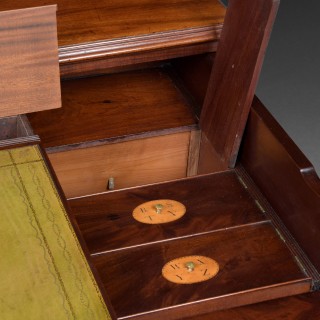 A superb George III period free standing Mahogany Secretaire Library Centre Cabinet by Gillows of Lancaster, panelled all round with a secretaire drawer containing “alphabet inlaid” lidded compartments and a removable writing slope above a kneehole cupboardflanked by 3 graduated drawers to each side and the whole raised on a plinth base.

Attribution: We know this is by Gillows of Lancaster even though there is no stamp on it or signature. What does it have – well it has the same knobs as the library secretaire Table by Gillows which we bought some years ago from Mere Hall. The timbers are exceptional quality with only the richest Mahogany used throughout. The secretaire opens to show letter inlaid oval panel hinged compartments which was a speciality of Gillows and it has the secret boxes with the original green material pulls hidden behind these compartments, and the hinged secretaire drawer.

These are all hallmarks of a family of desks made by Gillows in the last quarter of the 18th. century and written up in detail by Susan Stuart in her wonderful 2 volume set on Gillows.
There are numerous similar examples illustrated in “Gillows of Lancaster and London 1730-1840”. She states that this model of desk was made for several patrons including William Egerton at Tatton Park, Sir William Stanley of Hooton and his kinsman, Mr Thomas Stanley, Thomas Gibbons of Wolverhampton and the Earl of Shrewsbury. It appears an example may also have been made for Shavington Hall in Shropshire.

In common with the Satinwood Library Table made in 1790 by John Savage of Gillows for the London Gillows shop, this example is a completely free standing “library table to stand in the middle of a room” and all the above have the double depth secretaire drawer with the top sham drawers hinged to fold forward and, as each was a commissioned piece, there are variations according to the clients’ requirements. Some have an easel top, others have a double rising top and others have a fixed top.
This desk has an interesting variation on the theme of a sliding tray and rising top with a sliding, lift-out writing/reading slope fitted with a pen drawer and gilt tooled leather lined writing slope. The whole stands on casters and the drawers are fitted with brass drawer knobs.
Strong and important looking library tables of this pattern with sliding partitions, lettered compartments and secret (or private as Gillows called them) drawers were among the most expensive pieces made by them in the late 18th. century.