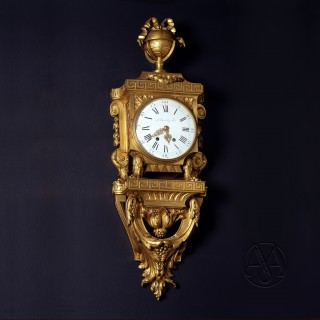 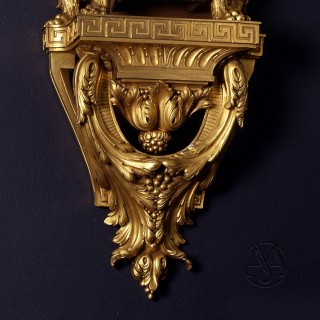 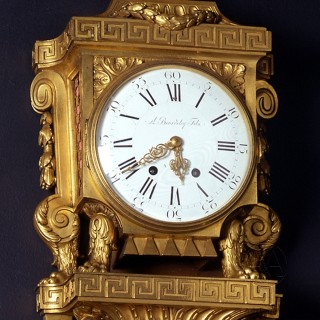 Signed ‘A Beurdeley Fils a Paris’.

The clock has a white enamelled dial with the hours marked in Roman Numerals and seconds in divisions of five in Arabic. The face signed ‘A Beurdeley, Fils’. This type of Cartel clock owes its inspiration to Cartel clocks produced during the Louis XVI period. Similar eighteenth century examples to this model are illustrated in Tardy ‘La Pendule Francaise’, p. 309-312.

The clock has a French eight-day duration spring powered movement, striking hours and full hours on a single bell. The suspension is a normal bimetallic spring with an adjustable brass pendulum driving an anchor escapement. The clock movement and pendulum stamped with the number ‘4422’.

The Beurdeley family were a flourishing dynasty of three generations of fine quality cabinetmakers, working from 1818 to 1895 to an exceptional standard and wide virtuosity. The firm was particularly well known for its exceptional metalwork, most commonly basing their designs on important Eighteenth Century examples. The mercurial gilding and hand chasing are often of a standard that makes them difficult to distinguish from late Eighteenth Century work.

The founder of the dynasty Jean Beurdeley (1772-1853), was a Burgundian craftsman, conscripted into the Napoleonic army. After hostilities in 1815, he settled in Paris opening a shop for Curiosités working as a latter day marchand-mercier. Initially on the rue Saint-Honoré, he purchased in 1840 the famous Hanover Pavilion situated on the corner of rue Louis-Legrand and Boulevard des Italiens, which was run by his only surviving son, Louis-Auguste-Alfred (1808-1882). This successful business, which had numerous official commissions, including the marriage coffer for the Empress Eugénie in 1853, was continued by his son, Alfred-Emmanuel-Louis (1847-1919).

The business continued in its traditional style with very few variations, until 1895. Alfred, along with Dasson, Grohe, Sauveresy and Fourdinois, the most famous artists of the period, took part in the 1878 Paris Exposition Universelle, where he won the gold medal. Following on from this glory he went on to open a shop in New York.

His participation in the 1883 Amsterdam Universal Exhibition drew even further attention to his work, and possibly as a result he was awarded the Ordre National de la Legion d’Honneur, France’s highest official mark of recognition.

The incredible quality of each generations work ranked the firm of Beurdeley as pre-eminent amongst Parisian makers of meubles de luxe.