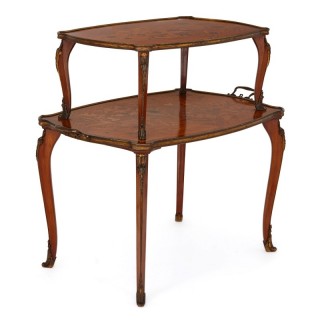 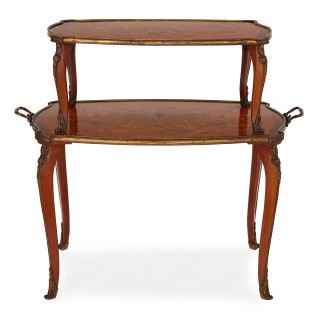 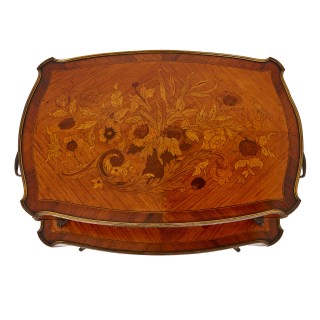 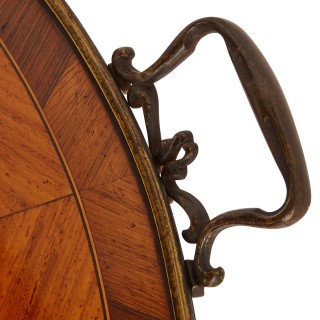 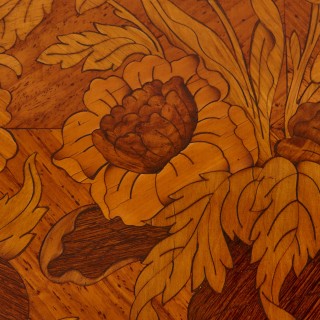 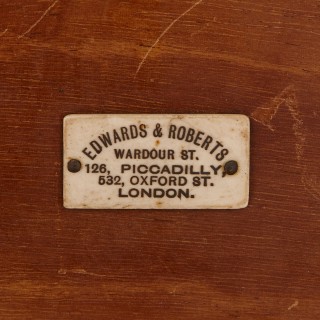 This beautiful table was created in England in the Victorian period by the acclaimed cabinetmakers, Edwards & Roberts. The company were based in London, where they established a name for themselves creating fine quality, fashionable pieces in 18th and 19th Century English and French styles. This two-tiered table — with its elegant cabriole legs and wonderful floral marquetry designs — is a prime example of fine Edwards & Roberts furniture.

The table is supported on four curving cabriole legs, which are set on scrolling gilt bronze feet and mounted with gilt bronze grotesque style satyr masks. The shaped table top is framed by a gilt bronze border, which is set with two handles. This lower shelf is ornamented with a marquetry design, depicting scrolling leafy forms and flowers in full bloom. On this shelf there stands a second, smaller table, which is similarly designed with four gilt-bronze-mounted cabriole legs and a marquetry top. This top is decorated with an image of a cornucopia full of flowers, crafted from a variety of wood types of contrasting colours.

Because of its tiered form, this table would most probably have been placed in a grand living room and used to serve tea from. Its elegant form and fine marquetry shelves would have added great style and ceremony to the act of drinking tea.