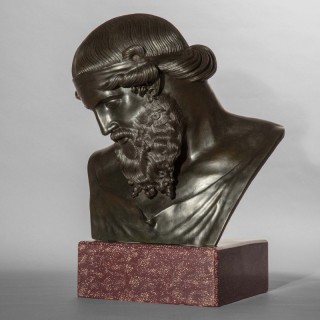 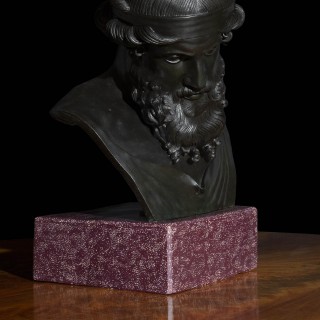 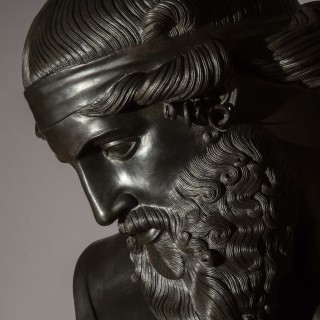 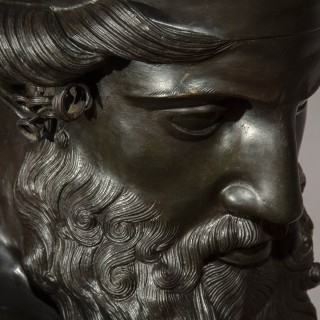 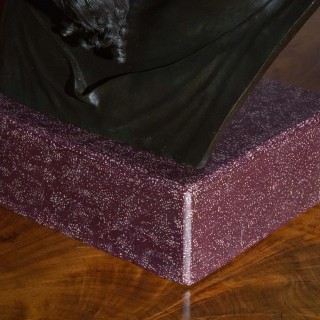 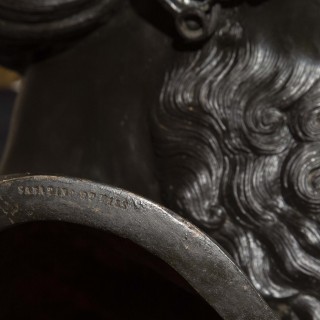 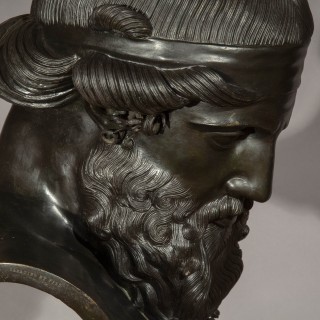 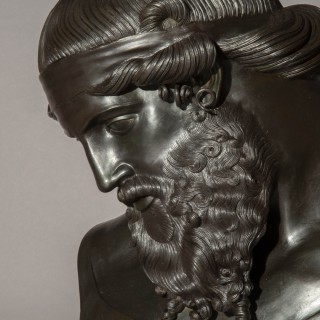 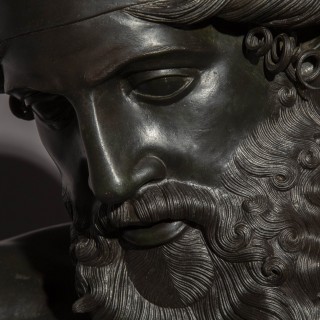 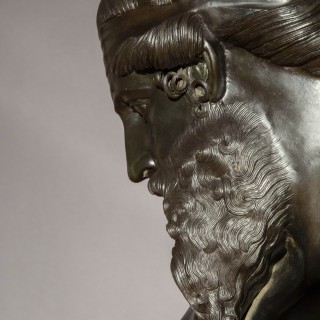 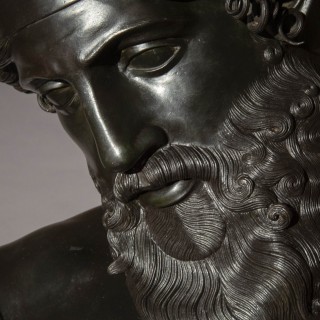 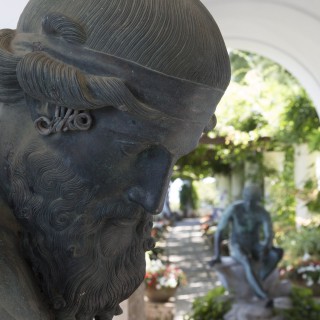 A superb ‘Grand Tour’ bronze bust of a bearded man, possibly Dionysus, after the original excavated at the Villa of the Papyri in 1754; by the Sabatino and Sons foundry, Naples. Mounted on a faux-porphyry base.
Italy, 1890–1900

Why we like it
Exquisitely sculpted, with beautiful patination, this handsome head has most attractive features and it reflects the Ancient Greek ideal of beauty. We were captivated by its timeless beauty while on a trip to Capri in 2020, where an identical bust an be seen at the whimsical Villa San Michele, the life’s work of the Swedish Royal physician, author and collector Axel Munthe (1857–1949), please see the last photo. Coveted by the 19th century intellectuals and aesthetes, such exquisite objects were not mere decorations, but symbols of their owner’s classical values and refined taste.

History
The bust dating from the mid-1st century AD, found in 1754 in the peristile of the so-called Villa of the Papyri at Herculaneum had long been misidentified as Plato, but was in fact, an upper part of a herm, most likely of Dionysus, and is now preserved at the Naples Archeological Museum.

Johann Joachim Winckelmann (1717-1768), a German art historian and one of the founders of scientific archaeology, wrote about this bust in his Critical account of the situation and destruction by the first eruptions of Mt. Vesuvius, of Herculaneum, Pompeii and Stabia in 1762: ‘The buckles formed by the hair of the head which has a long beard, are foldered only on the sides. The workmanship of this head is likewise worth our notice, as infinitely superior to that of all our modern artists. It is one of the most perfect pieces in the whole world; and I may take upon me to say that it is impossible for the art of man to produce any thing, in any branch superior to it…’

Villa of the Papyri was an ancient Roman villa in Herculaneum, in what is now Ercolano, southern Italy. It is named after its unique library of papyri (or scrolls), discovered in 1750. The Villa was considered to be one of the most luxurious houses in all of Herculaneum and in the Roman world. Its luxury is shown by its exquisite architecture and by the very large number of outstanding works of art discovered, including frescoes, bronzes and marble sculpture which constitute the largest collection of Greek and Roman sculptures ever discovered in a single context. It was situated on the ancient coastline below the volcano Vesuvius with nothing to obstruct the view of the sea. It was perhaps owned by Julius Caesar’s father-in-law, Lucius Calpurnius Piso Caesoninus. In AD 79, the eruption of Vesuvius covered all of Herculaneum with up to 30 metres (98 ft) of volcanic material from pyroclastic flows. Herculaneum was first excavated in the years between 1750 and 1765 by Karl Weber by means of tunnels. Most of the villa is still underground, but parts have been cleared of volcanic deposits. Many of the finds are displayed in the Naples National Archaeological Museum.

Sabatino De Angelis Foundry (Naples, 1840–1915)
Chiurazzi, De Angelis and Sommer where the main Neapolitan foundries that catered for the needs and tastes of the grand-tourists throughout the 19th and early 20th centuries. The Fonderia de Angelis, active from 1840, was instead the oldest of the three and certainly the most prestigious. Edwan Robinson, the director of the Boston Museum of Fine Arts since 1902, wrote about its founder, Sabatino de Angelis (b.1838), being ‘by far the best of the Neapolitan copyists, his talent and feeling for his line of work being rare in any generation’. Three different types of patination were available, the most common being the “Herculaneum”, “dark green and almost shiny” patina, the “Pompeii”, “green and blue not burnished”, and the “Renaissance”, “brown, shiny, burnished”. The present bust displays its original ‘Herculaneum’ patination.