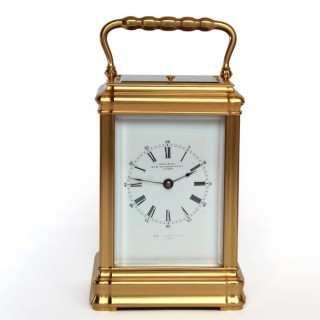 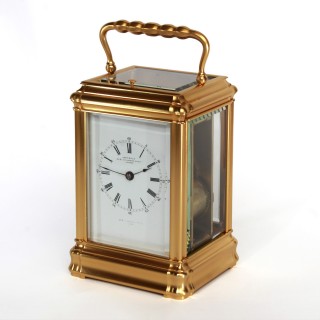 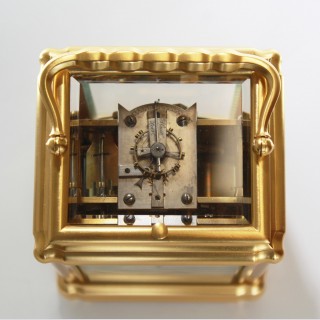 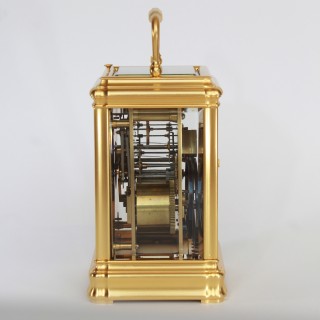 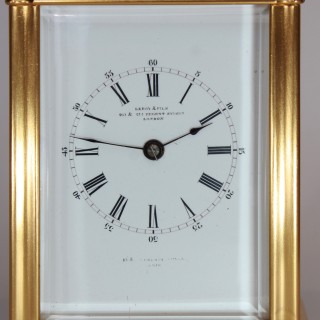 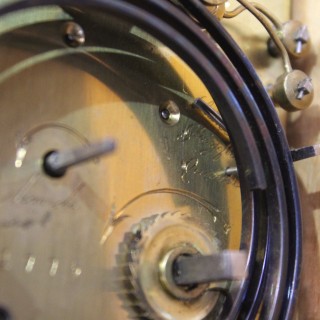 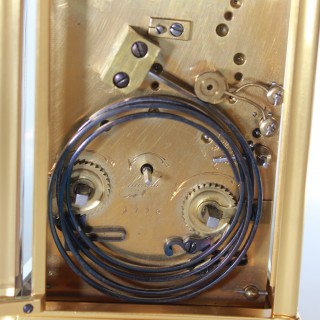 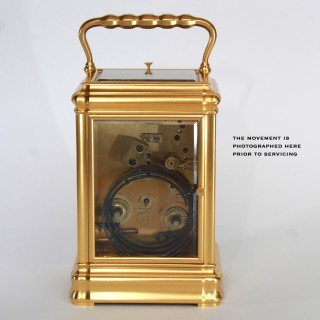 This grande sonnerie French carriage clock is a fine example by Leroy. It is in pristine condition, its gorge style case newly regilded.

Very unusually, the strike selection lever is sited on the backplate rather than the base. The lever itself is therefore more easily accessed although the engraving is hidden somewhat by the gong; the choices are Great ring of bells / Quarters / Silent. The backplate also bears Leroy’s serial number 1775.

The white enamelled dial is in perfect original condition. The front of the dial is signed LEROY & FILS, 211 & 213 Regent Street London & 13 Palais Royal Paris. It is signed on the back with initials AM, Leroy and 1775, together with some indecipherable script. Adolphe Mojon was the favoured dial-maker / enameler for Drocourt and this same signature appears on many Drocourt dials.

The eight-day movement strikes the grande sonnerie sequence on the quarters on a pair of gongs. That is to say, on the quarter, half and three-quarter hour the clock is ting-tang striking on two gongs following the hour strike.
The Quarters option gives a ting-tang strike on the quarters, with the hour (on one gong) only at the full hour. Silent is self-evident. There is also an hour repeat button on the top of the clock, which simply repeats the last hour struck.

The movement frontplate is signed H.L. on one side, with a blanc roulant number 17116 stamped on the other side. The gong-block is signed F.D.

H.L. supplied movements to many high quality makers – Drocourt, Jacot and Leroy among them. According to Leigh Extence’s research, the last recorded signed H.L. movement prior to the take-over of their workshops by Drocourt in 1876/77 had a blanc roulant number 10757, when they changed from H.L.’s curved spokework on the wheels to straight crossings.

The wheel work on this clock has straight crossings, and so (together with the blanc roulant numbering sequence, the signed gong block, etc.)  we can assume that actually this clock was made by Drocourt for Leroy in around 1880, using stock of plates that they took over from H.L.

The original silvered platform is engraved Slow and Fast in script on the narrow cock, and again on the backplate.

The clock is in good working order, but is yet to be overhauled. It will be overhauled for sale, and guaranteed for 3 years.