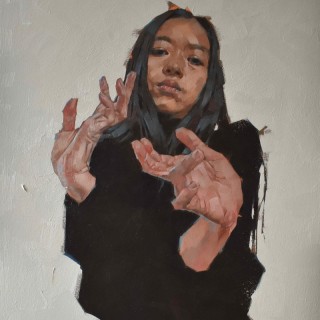 Simon Davis divides his time between portrait painting and comic book illustration for the cult British comic 2000ad. His fully-painted work for the title has been collected into numerous books worldwide.

In 2008, he was runner up in the BP Portrait award and that same year was elected as a member of the Royal Society of Portrait painters (RP). He is currently their Vice-President.

His choice of work is always eclectic and this includes storyboarding music videos for the likes of Tori Amos and Muse, designing a tattoo for Alex Garland’s film ‘Annihilation’ and painting the poster for Ben Wheatley’s film, ‘Happy New Year, Colin Burstead’.

His work is in collections all over the world and is exhibited widely.

He lives and works in East London.