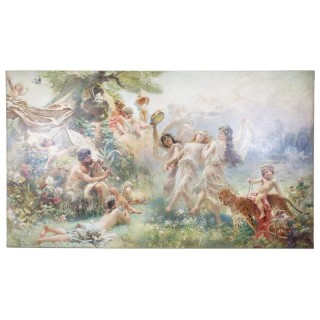 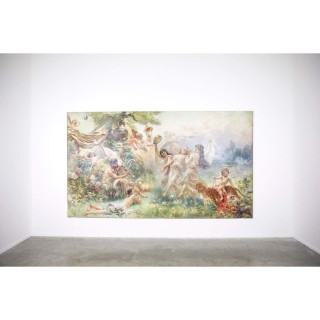 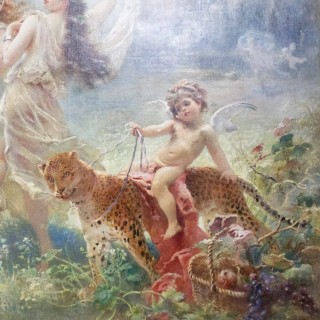 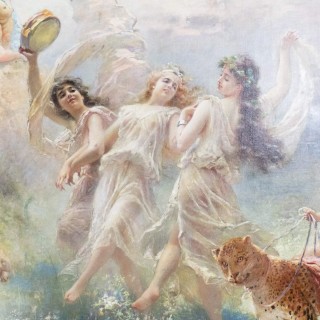 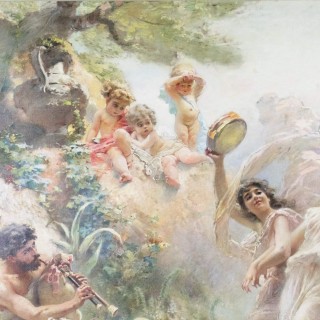 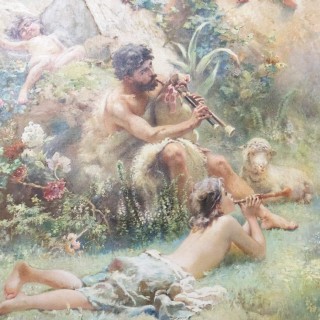 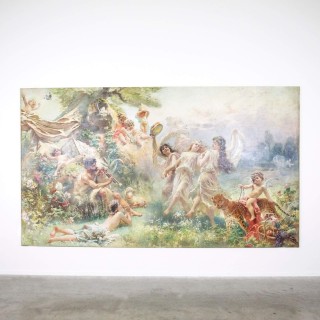 Titled ‘Happy Arcadia’, the painting depicts real and mythical figures playing music and dancing in a pastoral idyll. In the centre right, three beautiful young women, who wear diaphanous flowing white dresses, perform a dance, with one woman playing a tambourine. Flowers and leaves are entangled in their beautiful long curly hair, and they smile as they dance. On the left, a shepherd sits and plays a bagpipe, accompanied by a boy on a pipe, who lies on his front on the grass. Cherubs lounge on mossy rocks in the distance, watching the dance performed before them. In the right foreground, a cherub rides a saddled and bridled leopard, symbolising passions restrained. The figures are placed within a beautiful green meadow, which is full of colourful wild flowers and butterflies.

This painting was one of sixteen produced by Makovsky for the concert room of a mansion, owned by one Sergei Pavlovich von Derviz. The mansion was located on the English Embankment in St. Petersburg. The pictures depicted allegories of painting, sculpture, music and poetry, as well as putti, animals, and mythical creatures. ‘Happy Arcadia’ was one of the largest paintings, and was therefore placed at the centre of the display.

While ‘Happy Arcadia’ is monumental in its scale, Makovsky has painted the picture in such a way that it appears weightless and airy. It is a highly decorative piece, which was designed to add colour and splendour to the Derviz concert hall.

The sixteenth canvases were first displayed as a complete set in 1907, in an exhibition in the Derviz mansion, organised by the then-owner, Baron Anton Georgievich Alftan. The show was praised by visitors, and one newspaper (Novoe Vremia) reflected that, ‘It’s been a long time since we’ve had such a beautiful exhibit as that of Makovsky, which opened on Sunday – there have been much bigger more interesting shows, but none more beautiful.’

This painting, ‘Happy Arcadia’, was signed sometime after the piece was completed. It is likely the signature was added by the artist himself.

Baron Sergei Pavlovich von Derviz, St. Petersburg
Baron Anton Alfan, St. Petersburg
Given by the Soviet Army in payment for boots, circa 1930s to Gottfried Berglund, owner of Götarsvik manor, Örebro, Sweden, and installed in the drawing room there