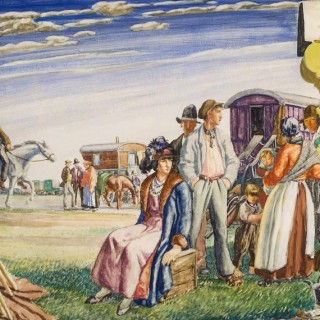 Born in Leicester, Morley entered the Leicester School of Art to study architecture in 1897. In 1901 he was awarded a scholarship to the Royal College of Art, and in 1905 a travelling scholarship enabled him to go to Rome and there he decided to abandon architecture in favour of painting. After a time in Paris is 1908 he returned to London where he married and settled in Kensington. He first exhibited at the Royal Academy in 1905 and was to become a regular exhibitor there; his Apollo and Marsyas was purchased by the Chantrey Bequest in 1924 (Tate Gallery). Although he is known for his large and monumental figure subjects he also worked in tempera, watercolour and was an excellent etcher. The 1930s slump forced Morley to accept a teaching post at the St Martin’s School of Art; he was also appointed to the Faculty of Engraving at the British School in Rome and published a number of articles and books on art techniques.