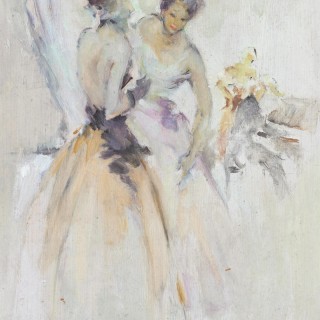 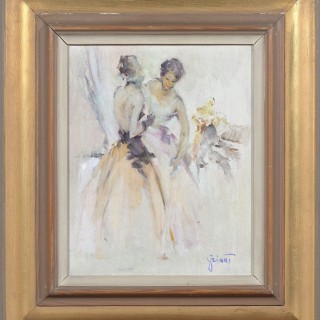 Original oil on board by Modern French artist and Illustrator Pierre Grisot.
A frothy little number from one of the better known French commercial painters and illustrators of the 1950s and 60s. The great Jean-Gabriel Domergue had created a market for glamour girls in fine art – indeed he is said to have invented the Pin-up – and Grisot was prominent in the next generation that happily filled that market. He painted exaggerated mademoiselles with improbably pert noses and fashion illustration for Dior marketing campaigns. These two rather elegant fashionistas of the 1950s are from the more sophisticated end of Grisot’s output.
Available at Panter and Hall.

Grisot was born in Paris. At the suggestion of his family, he was trained as an engineer and even took a job as one in Besancon, France. However, he nurtured a secret passion for the arts and eventually enrolled himself at the Ecole des Arts Decoratifs in Paris. Studying there for a year he moved on to the Ecole des Beaux Arts where he received a diploma as a drawing instructor. He began a career teaching painting and drawing but soon gave it all up to concentrate on his own art, holding his first solo show in German occupied Paris in 1942. After the war he spent some time in Tunisia, travelling the world exhibiting his paintings in Germany, Belgium, Sweden and the United States. He exhibited frequently in Paris at the Salon des Independants and with the Paris School, the group that included Vlaminck, Raoul Dufy and Villon. He is also known for his hat and perfume advertisements for Christian Dior, and as a fashion illustrator for the journal ‘L’Officiel de la Mode et de la Couture’.