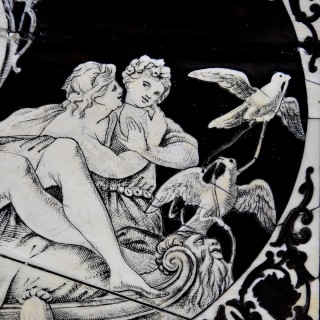 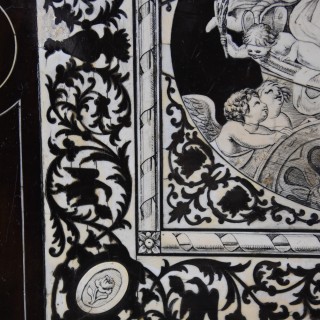 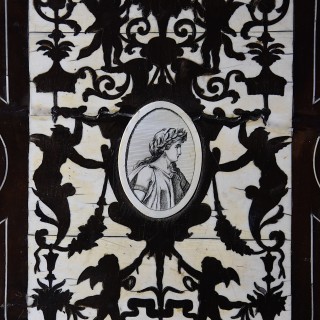 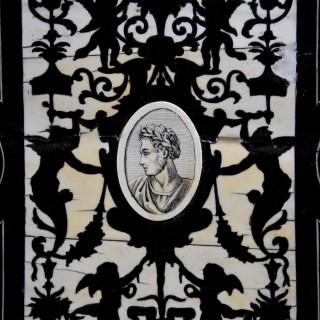 A highly decorative large 19th century (circa 1870) North Italian table top in the Renaissance style in the manner of Giovanni Battista Gatti (1816-1889) who was influenced by the 16th century maker Iacobus Fiamengo.

This pine table top is veneered in ebony with profuse inlaid ivory or bone decoration consisting of a central inlaid oval panel of a female in her chariot, possibly the Goddess Aurora the Goddess of dawn, surrounded by putti with inlaid foliate and bird designs, to either side inlaid panels of figures also surrounded with inlaid putti and foliate decoration leading to a border of inlaid panels of foliate decoration with outer moulded edge.

Giovanni Battista Gatti was a cabinetmaker during the 19th century working in Florence, Rome and Faenza specialising in the techniques popular in the Renaissance particularly the use of inlaid ivory, bone and shell to ebony or other darker woods, he was no doubt influenced by Iacobus Fiamengo who produced many such works.

We would suggest using this as a superbly decorative wall hanging, we can attach fixings to the reverse of the top if necessary.

This table top is in good condition for age with some old repairs, it is of stable construction and can go straight into a home.

good condition for age with some old repairs