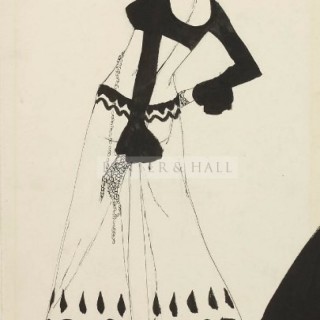 The eldest son of Anne Redpath, possibly the most famous Scottish woman painter of the twentieth century, Michie was born in St Omer, France where his father was working as an architect. When the 1930s recession led the family to return to Hawick in Scotland, Michie attended the local high school where he won a scholarship to study architecture at Edinburgh College of Art. War service in the RAF interrupted his studies and he became one of the youngest pilots to receive his wings, serving with distinction as a night-fighter pilot in reconnaissance aircraft over Germany and occupied territory.

Reluctant to return to his architectural studies after the war, Michie worked as a freelance illustrator and graphic designer. He had a successful career as a fashion draughtsman for leading magazines in London, before moving to Dorset in 1950.

A visit to the 1962 Venice Biennale had a dramatic artistic and professional impact. It was there that Michie first encountered the work of the American abstract expressionists: Robert Motherwell, Franz Kline and Mark Rothko. The experience drove him towards painting and particularly abstraction. His new artistic philosophy was confirmed at a meeting with Rothko at an exhibition of paintings by his friend John Plumb at the Axiom gallery in London in the late 1960s.

His first solo exhibition of his new work was held at Edinburgh’s Traverse Theatre in 1964. These large acrylics, richly coloured and sensuously textured, linked him not only to the American painters he admired, but also to the Edinburgh school of colourists. That same year he also exhibited Gold Relief 21 at the Royal Scottish Academy, and was a finalist in an Arts Council open painting competition. He exhibited widely in Britain and abroad and in 1972 a major show in São Paulo led to the modern art museums of Rio de Janeiro and São Paulo purchasing work. His sculpture was shown at the Barbican Centre in London in 1981.

Peter Davies concluded his excellent obituary of Michie in the Independent as an artist who ‘belonged to a generation of later modernist artists who shared an optimistic but never naïve world-view conditioned by an understanding of human nature gained during wartime. A sophisticated, urbane man with a quiet, wry sense of humour, he overcame a strange mix of privilege and disadvantage to pursue a difficult career.’

This small collection of Fashion illustrations were purchased directly from the artist’s family. They cover an exciting period of British fashion from the ascent from post war austerity to the swinging sixties: a fascinating potted timeline plotting the evolution of women’s design from the ‘New Look’ to ‘Hippy Chic’.