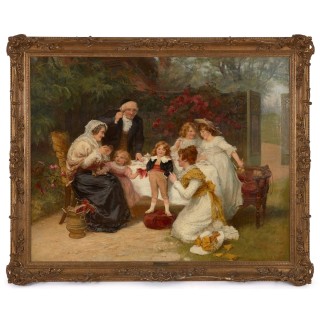 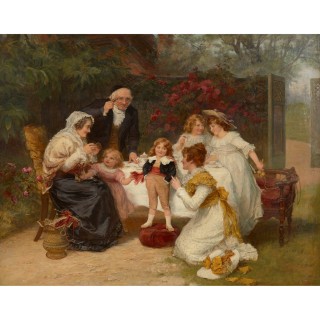 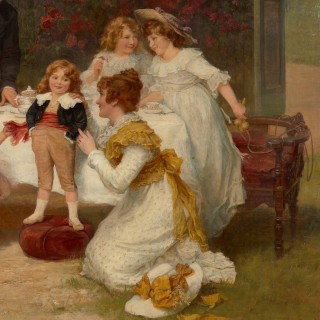 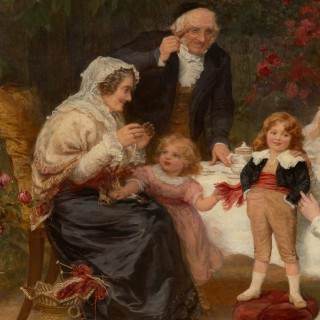 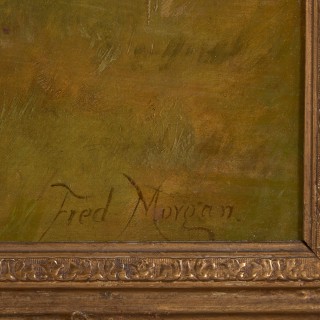 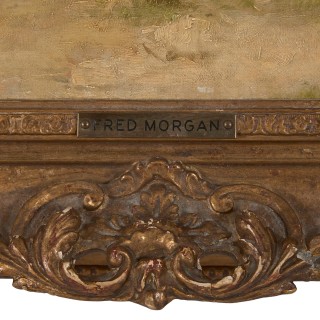 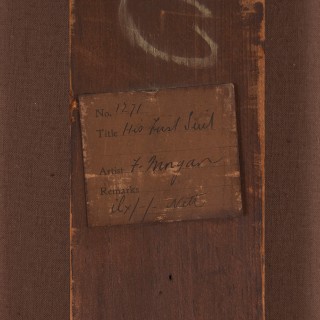 Executed in oil-on-canvas, and mounted in a carved giltwood frame, this beautiful English painting, titled ‘His first suit,’ is by the late Victorian artist Frederick Morgan, an artist working in a similar style to that of the more well known Arthur John Elsley. This painting bears a number of similarities to Morgan’s famous painting ‘His first birthday’.

Both works depict an idyllic, middle-class English summer scene. Morgan painted from life and a number of the models in the paintings are the same in both works, such as the elderly couple on the left, who also feature in ‘His first birthday’, as well as Morgan’s wife Mary, here the model for the woman kneeling on the floor. Morgan’s son Courtney, aged around four, is in fact the young boy showing off his first suit.

The painting is a delightful celebration of the Victorian notion of the unspoilt childhood that was revered and promoted by the middle and upper-classes. Childhood became an enormously popular theme in art during the nineteenth century and many of Britain’s most talented artists chose to depict various aspects from the impoverished orphan to the exquisitely dressed rosy-cheeked paragon of purity and sweetness. As with many of Fred Morgan’s works His first suit was also produced as a coloured photogravure.

It is signed ‘Fred Morgan.’ (lower right) and further signed, inscribed and numbered ‘No. 1271/His first suit/F. Morgan/ilx/-/- Nett’ (on the artist’s label attached to the stretcher).