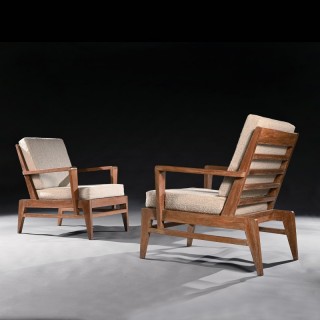 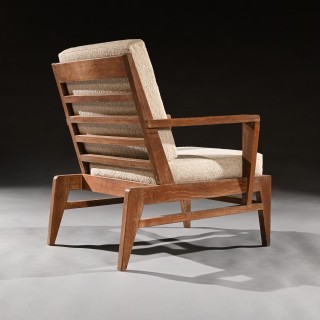 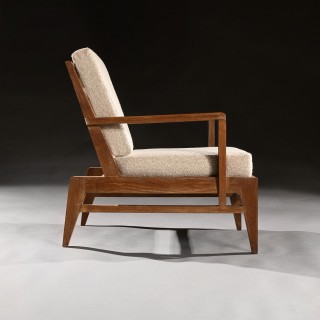 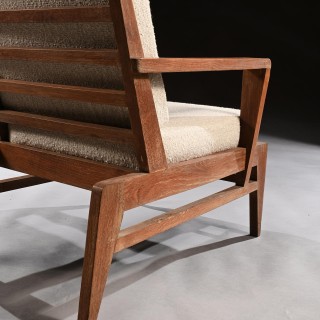 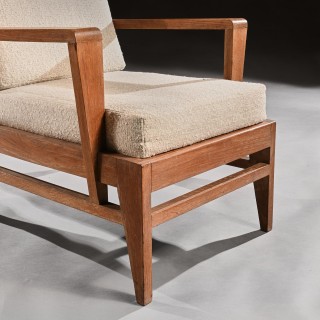 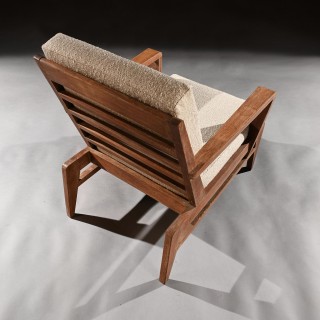 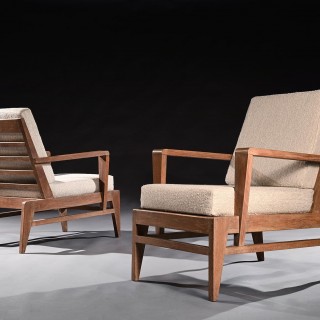 Uber cool in design, from the French Reconstructive period of the 1940’s by one of the masters, the design of these chairs have become a French mid Century classic. Constructed from solid oak having four slatted backs with tapering armrests and extended back foot. Reupholstered in a fine quality linen / wool fabric.

This chair being to most favoured of Rene designs and shown on the front cover of the book Rene Gabriel by Pierre Gencey “Des arts decoratifs a la Reconstruction’.

Rene Gabriel was a power house in the post war modernist movement and an innovator. Born in Paris on the 14th September 1890, he had a very clean style combined with elegance which inspired many of the new designers of the post war ear of the 1940’s-1950’s.

Gabriel was president of the Société des artistes décorateurs from 1944 to 1947 and headed the workshop at the École Nationale Supérieure des Arts Décoratifs from 1946. In 1949 he was named a knight of the Legion of Honour. René Gabriel died on 30 October 1950.

Paul Breton, director of the Salon des arts ménagers, created a prize in Gabriel’s honor in 1951 to boost mass production of high-quality modern furniture. The Prix René Gabriel is the most prestigious French design award. It rewards a designer for innovative and democratic furniture.

Constructed from solid oak having four slatted backs with tapering armrests and extended back foot. Reupholstered in a fine quality linen / wool fabric.